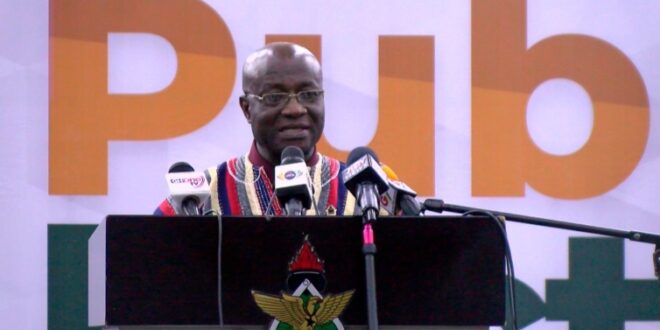 Majority Leader in Parliament, Osei Kyei-Mensah-Bonsu, is proposing the adoption of the Westminster system of government for Ghana – where a Prime Minister leads government business.

This, he believes, will help deal with corruption that may arise in an attempt by a President and political sponsors to recoup investments made after gaining power.

“Where we are going as a nation is not sustainable. We are getting on a very slippery route in terms of monetizing our politics. Both Parliamentary elections and Presidential elections. As a matter of fact, my personal preference is with the Westminster type where the Prime Ministers are more accessible to us.

“In terms of expenditures, they spend far far less in getting themselves elected from the constituencies and that obligation to satisfy sponsors is much less, and with that they will be able to deal with corruption.

He was speaking at a public lecture at the Kwame Nkrumah University of Science and Technology on the theme, ‘The Constitutional Review: The Perspective of a Legislator’.

According to the Majority Leader, at least 50 million dollars is spent on electioneering by a Presidential candidate from the party level to the national election.

Research by the Centre for Democratic Development, premised on the 2020 general elections, estimates about six hundred thousand dollars is spent by Members of Parliament to secure their seats.

In checking the investments made to win elections, the Majority Leader in Parliament suggests the Westminster system of government where the Prime Minister is more accountable.

The Member of Parliament likens the powers conferred on the President to that of a monarch, since he makes over five thousand appointments to public offices.

Mr. Kyei-Mensah-Bonsu believes there should be a review of the constitutional provision.

He further proposed that ministers who are not part of cabinet should be cut off to save the public purse.

“Many of our Ministers do not add value to our governance, that is the truth. I am not here talking about the current NPP administration. I refer to all administrations since 1993, the time has come to seriously introspect into this”, he emphasized.

“And hasn’t the time come for us to place in the constitution an upper ceiling on the number of ministers of state that we should have. Cabinet Ministers assist the President in the evolution of policies, that is according to Article 76 of the constitution.

“All bills and agreement that are presented to Parliament are underpinned by governmental policies and principle which the cabinet Ministers propose to cabinet so if you are not a cabinet minister, you are not part of the process of evolution of policy”, he explained.

In concluding his lecture, the legislator said an introspection into Ghana’s constitution which has a cumbersome amendment procedure is long overdue.