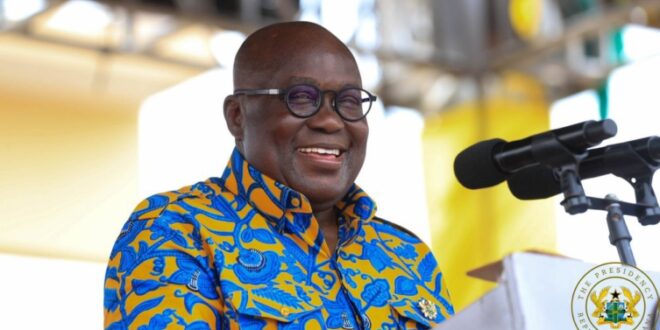 I will support whoever emerges successful – Akufo-Addo on NPP flagbearship

President Akufo-Addo says he is committed to supporting whoever the governing New Patriotic Party (NPP) selects as flagbearer for the 2024 elections.

The President, speaking on Kumasi based Pure FM, said he has no favourites amongst the contenders.

“The decision has to be the decision of the party. My thing is that whoever the party elects as the flagbearer for 2024, that person is who I will support and God willing, if I have the strength, campaign for that person for him or her to become president,” he said.

Akufo-Addo said his decision not to support any of the contenders is because, “If an outgoing president is known to be leaning towards X or Y, it could be problematic since it could bring disturbances in the party, because not everybody would agree with the president’s preference.”

I think that I have to keep away from that and make sure that there is a level playing field and then we get somebody who will be able to meet the demands of the people and unite the party around our programme and around his leadership that is what will help us so that we can go to the election in 2024 as a united force to win over our opponents,” he stressed.

Commenting on ‘breaking the eight’, he said he strongly believes that the NPP’s quest to break myth surrounding the the eight-years cycle is achievable.

“I think that the programme and the work this government is doing is sufficient foundation and what is left is, we the NPP, to what extent, we are going to be one. To what extent we are preparing for the proper mobilization, to what extent our organization is coherent and what message we will have for the country,” he said.