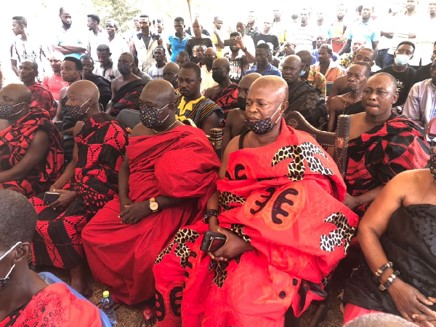 Appiatse explosion: Chief claims there was no police escort for explosives truck

Traditional rulers in Appiatse in the Western region have dared the police administration to provide evidence to back claims that the vehicle carrying explosives from Maxam Ghana that exploded at the community (Appiatse) had police escort.

Dressed in full mourning traditional regalia, the Chief of Bepo near Bogoso, Nana Ataa Brembi II, asked the government and the team of investigators to ignore any assertion that there was a police escort for the truck.

Speaking during an interaction with the Ministers of Lands and Natural Resources, Works and Housing and the Western Regional Minister, Nana Brembi alleged that at the time of the arrival of the truck in the community, there was no police escort.

He said if there was any police escort for the truck, the members of the community would have seen it.

“I want to let the ministers present to know that the information going round that the truck was being escorted is not true. I want to emphasise again that it is not true,” he said.

He said the accident happened in the full glare of the people of the community and therefore the community members had firsthand information on the incident.

“If they challenge us, they should produce the said police officer to tell us where he was when the accident occurred,” he dared the police, adding “….they should tell us if the police escort was before or after the truck….”

Nana Brembi commended the Minister for Lands and Natural Resources for his efforts in ensuring that the injured as well as the displaced people in the accident received the needed support.

“We are grateful and we are ready to ensure that relief and comfort is brought to the people especially those who lost their loved ones,” he said.

In response, the Minister for Lands and Natural Resources, Mr Samuel Abu Jinapor assured the chiefs and people of the area that there would be thorough investigations into what led to the explosion.

“Let me assure Nana that I have heard what he said about the no escort issue, and assure him that the findings would establish all that – we will be able to establish if there was an escort or not,” he said.

He said all relevant institutions and agencies had been engaged to investigate the incident, expressing the hope that the team of investigators would do a good job to satisfy all lingering questions.

Mr Jinapor further assured the community that the investigators would factor their inputs into their investigations before they would make their findings public.

When the Daily Graphic interacted with some members of the community, they corroborated the claims by their chief that there was no escort leading the truck at the time of the accident happened.

In a related development, a delegation from the Western Regional House of Chiefs visited the community to commiserate with the people.