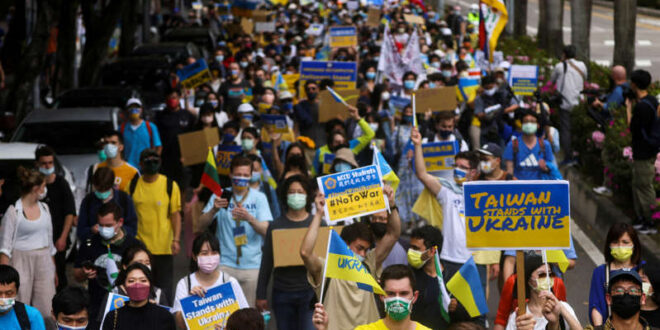 BEIJING/TAIPEI (Reuters) – China’s government on Wednesday lambasted Taiwan’s humanitarian aid for Ukraine and sanctions on Russia as “taking advantage of other’s difficulties” after the island announced it was sending more funds donated by the public for refugees.

The war in Ukraine has garnered broad sympathy in Taiwan, with many seeing parallels between Russia’s invasion and the military threat posed by China, which views the democratically governed island as its own territory.

Taiwan has joined in Western-led sanctions on Russia.

Asked about Taiwan’s aid and sanctions at a news conference in Beijing, Zhu Fenglian, a spokesperson for China’s Taiwan Affairs Office, said Taiwan’s government was trying to latch onto the issue for its own purposes.

“The Democratic Progressive Party authorities are using the Ukraine issue to validate their existence and piggy back on a hot issue, taking advantage of other’s difficulties,” she said, referring to Taiwan’s ruling party.

“Their attempts to incite confrontation and create hostility through political manipulation will not succeed.”

Taiwan’s government says that on Ukraine it has a duty to stand with other democracies.

Late on Tuesday, Taiwan’s Foreign Ministry announced a second $11.5 million donation to help refugees after an initial donation this month of $3.5 million. President Tsai Ing-wen has gifted one month of her salary.

“During this conflict, the Taiwanese people have shown boundless compassion,” the ministry cited Foreign Minister Joseph Wu as saying at an event attended by several senior Taipei-based Western diplomats, including the de facto European Union ambassador.

China, which has refused to condemn the Russian invasion, said last week the Chinese Red Cross would provide humanitarian assistance worth 5 million yuan ($786,000) to Ukraine, its first publicly announced aid to the country since the war.