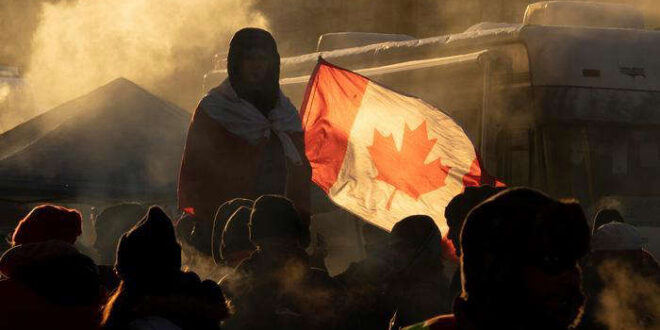 Thousands of protesters descended in Ottawa over the weekend. Ottawa’s mayor said that the situation was ‘completely out of control.’The mayor of Canadian capital Ottawa declared a state of emergency on Sunday amid trucker protests against COVID-19 restrictions.

Thousands of protesters descended in Ottawa on the weekend, joining a hundred who remained from last weekend.

The demonstrations began as truckers protested against vaccine requirements when crossing the border between the US and Canada, and later turned into a broader protest against COVID-19 restrictions and Prime Minister Justin Trudeau’s government.

Mayor Jim Watson said that the declaration highlights the need for support from other jurisdictions and levels of government.

The declaration gives the city additional powers around procurement and how it delivers services, and may also help the city purchase equipment required by frontline workers and first responders.

Earlier in the day, Watson had described the situation as “completely out of control.”

“Clearly, we are outnumbered and we are losing this battle,” Watson told local radio station CFRA.

Watson also called the truckers “insensitive,” criticizing the noise produced by the protests. According to Watson, protesters have continued “blaring horns and sirens and fireworks, and turning it into a party.”

“Anyone attempting to bring material support (gas, etc.) to the demonstrators could be subject to arrest,” Ottawa’s police force tweeted.

Police also said that they had issued more than 450 tickets since Saturday.

Police in Quebec City said some 30 big trucks were blocking a major artery and had been warned they would face fines if not moving soon.

City council member Diane Deans said that the protests are “bigger than just a city of Ottawa problem, this is a nationwide insurrection.”

On Saturday, Ottawa police chief Peter Sloly called the demonstrations a “siege” and asked for reinforcements.

The federal Canadian Mounted police are due to send reinforcements of 250 officers to Ottawa.

US Republican support for the protests

On Sunday, a former US ambassador to Canada denounced such statements, saying that the US should stop interfering in the domestic affairs of its neighbor.

“Canada US relations used to be mainly about solving technical issues,” Hayman tweeted.

“Today Canada is unfortunately experiencing radical US politicians involving themselves in Canadian domestic issues,” he added.

“Trump and his followers are a threat not just to the US but to all democracies.”