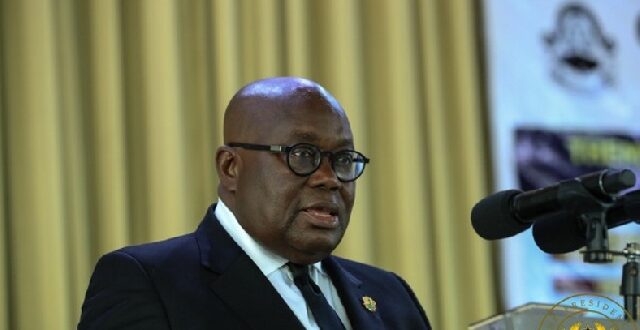 President Nana Addo Dankwa Akufo-Addo has said member states of the African Union must work collectively to reform the global financial architecture, as well as build and strengthen its financial institutions since the status quo, rating agencies inclusive, is having a stranglehold on Africa’s economy.

Delivering his second report to the Assembly, on Sunday, 6th February 2022, in his capacity as AU Champion for Financial Institutions, President Akufo-Addo noted that the AU is currently engaged in the process of establishing four (4) financial institutions (AUFIs), namely the African Central Bank (ACB), the African Investment Bank (AIB), the African Monetary Fund (AMF), and the Pan African Stock Exchange (PASE).

“This, he explained, is detrimental to the operationalisation of the African Monetary Institute, which is the first step towards the establishment of the African Central Bank”.

President Akufo-Addo, thus, presented a number of recommendations to the AU Assembly for its adoption and endorsement, which, he said, “would be critical towards the establishment of the AUFIs”. They have been captured in the Draft Assembly Decision that will be submitted to Your Excellencies for consideration and adoption.

On the matter of SDR re-allocation, “within the context of optimising its impact on Africa”, the President recounted that, “last May, in Paris, world leaders made a commitment to allocate the historic SDR 650 billion issuance to IMF member states, with Africa’s quota allocation of 5% or SDR 33.3 billion”.

“We value this commitment to additional resources, of which our continent is in dire need. It is unfortunate, however, that the only proposal that has been put on the table by the European countries, so far, is to re-channel these SDRs through only one institution, the International Monetary Fund (IMF),” he said.

President Akufo-Addo continued, “The IMF should not be the sole beneficiary of such rechanneling. We believe that our own continental institutions, such as the African Development Bank (AFDB) and Afreximbank, should be recipients of the recycling of these SDRs”.

“Our Finance Ministers and the United Nations Economic Commission for Africa (UNECA) have advocated the use of regional development agencies to be included in this rechanneling.”

He told the Assembly that African finance ministers, with UNECA, “have consistently championed the allocation of SDRs to capitalize AFDB and AfreximBank, to help establish an African Stability Mechanism, and to initiate a Liquidity Support Facility (LSF)”.

“We need to guard against the continuing consequential stranglehold of the rating agencies, which has affected the cost and access to capital markets for African countries, and has, during this COVID period, resulted in the downgrading of many African countries, exacerbating, even more, their funding challenges,” President Akufo-Addo said.

He, thus, urged the AU Assembly to urge G20 leaders to stick to their commitment to reallocate to Africa the SDR $100 billion agreed to at the Paris Summit in May 2021.

Moody’s said its projection shows that more than half of the country’s revenue will go into the payment of interests for the next few years, and proposals by the government to fix the challenge does not seem to be feasible, especially given the fragile post-pandemic environment.

“While Ghana’s external buffers and moderate external debt amortisation schedule in the next few years afford the government a window of opportunity to deliver on its strategy, balance of payments pressures will build up the longer government’s large financing requirements have to rely on domestic sources,” it noted.

Apart from the long-term issuer and senior unsecured debt downgrade, Moody’s also downgraded Ghana’s bond enhanced by a partial guarantee from the International Development Association (IDA, Aaa stable) to B3 from B1, “reflecting a blended expected loss now consistent with a one-notch uplift on the issuer rating.”

It also lowered Ghana’s local currency (LC) and foreign currency (FC) country ceiling to respectively B1 and B2 from Ba3 and B1.

“Non-diversifiable risks are appropriately captured in an LC ceiling three notches above the sovereign rating, taking into account relatively predictable institutions and government actions, low domestic political, and geopolitical risk; balanced against a large government footprint in the economy and the financial system and current account deficits,” Moody’s said in its report.

About a month ago, Fitch also downgraded Ghana’s Long-Term Foreign-Currency Issuer Default Rating (IDR) to ‘B-’ from ‘B’ with a negative outlook.