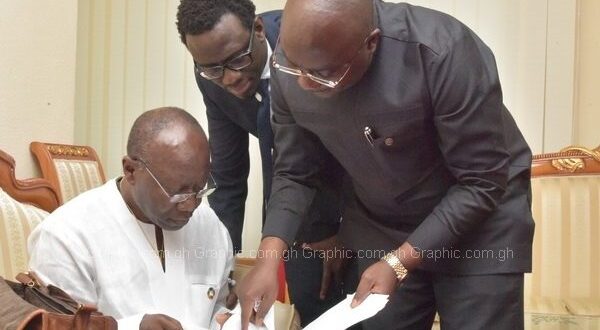 Moody’s downgraded Ghana’s long-term issuer and senior unsecured debt ratings to Caa1 from B3, and changed the outlook to stable from negative.

It said the new rating reflects the woes Ghana in  fixing its liquidity and debt challenges.

It also attributed the rating to the country’s ineffective revenue generation.

But the Finance Ministry in a statement said it is puzzled by Moody’s rating of the country, despite the recent fiscal consolidation measures announced by the government.

“We are at odds to understand Moody’s assertion of the deterioration of Ghana’s institutional strength, given Ghana’s reputation as a beacon of democracy in Africa.”

“The government of Ghana is therefore completely puzzled by the decision to downgrade Ghana’s credit rating to Caa1, despite the series of progressive engagements we had with the team from Moody’s, the quality of data supplied, as well as the medium-term economic and fiscal focus of the government, underpinned by key fiscal consolidation reforms such as the policy decision to cut expenditure by 20%, as recently announced by the Minister of Finance,” government added in the statement.

The Finance Ministry in the statement also disclosed that it appealed Moody’s rating, but was unsuccessful.

“Unfortunately, Moody’s rejected our appeal and went ahead with the downgrade despite all the concerns raised, which we believe were not factored into their decision.”

The Finance Ministry also raised concerns with Lucie Vila, the leader of Moody’s team that downgraded the country’s credit rating.

“Prior to the announcement, between 28th January to 3rd February 2022, Moody’s virtually engaged senior government officials of the Ministry of Finance and the Bank of Ghana on various issues. The Moody’s team was led by Lucie Villa (Lead Analyst on Ghana at Moody’s) and supervised by Matt Robinson. It is worthy to note that Lucie Villa only recently (beginning of January 2022) took over as the primary analyst covering Ghana for Moody’s. We are very concerned that Ms. Villa may not properly understand and evaluate Ghana’s deepening credit story since obtaining our first credit rating back in 2003. She also has not visited the country since assuming the role and as such this downgrade at this critical time was based entirely on a desktop exercise, virtual discussions and what we believe to be the omission of critical data provided.”

Regardless of the government’s hurdles in overturning Moody’s rating, the Finance Ministry says government will continue to pursue ongoing efforts at revitalizing the economy amidst the COVID-19 pandemic.

It also says government remains absolutely confident in “our resolve to overcome the current chalenges with fiscal discipline and growth, in line with the president’s vision to build a strong, resilient and prosperous economy and a Ghana Beyond Aid.”

Moody’s recent rating comes barely a month after Fitch downgraded Ghana’s Long-Term Foreign-Currency Issuer Default Rating (IDR) to ‘B-‘ from ‘B’ with a negative outlook.

Fitch’s rating is the worst for the country in 22 years.