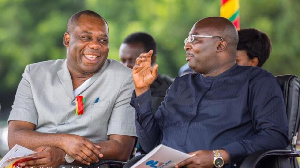 Former leading member of the National Democratic Congress (NDC) Stephen Atubiga has noted shivers have been sent down the spines of his former political party over Dr. Mathew Opoku Prempeh and Dr. Mahamudu Bawumia ticket for the 2024 elections.

According to him, the weak NDC leadership have had sleepless nights mapping out unworkable strategies to neutralize the potency of the ticket the governing New Patriotic Party (NPP) will be presenting in Dr. Mahamudu Bawumia and Dr. Matthew Opoku Prempeh.
Stephen Atubiga was speaking on Kumasi-based Wontumi Radio when he made this known.

“The Energy Minister NAPO when you present a proposal to his office, he does not discriminate along party lines. The way he has been able to restructure the energy sector and made it appealing is commendable.

“For me if Bawumia is voted and I’m asked to choose a running mate for him to balance the equation and give the NPP votes. I will choose someone who has a listening ear, listen to the youth of the country. I have toured all the 268 Districts in the country and what I can hear on the ground is what I’m telling you people and I can tell you he will be the best running mate for Dr. Mahamudu Bawumia.

“I’m aware that if that combination comes true, the NDC cannot sleep. Dr. Bawumia has done a lot in the North and they are solidly behind him. Talk about the schools and desks and other infrastructure he has provided for schools in the North”.

Stephen Atubiga indicated that his political party is gradually taking shape and since it’s made up of cadres and founding fathers of the NDC, they will share votes with the NDC indicating that “we will garner all the protest votes from the NDC because they are selfish and do not reward hardworking members”.