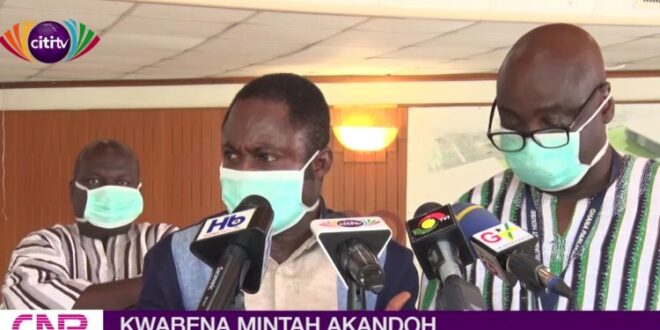 The Ranking Member on the Health Committee of Parliament, Kwabena Mintah Akandoh has said the Minority will continue to pile pressure on the government until all abandoned hospital projects across the country are completed.

He said the pace of construction of the 120-bed Sekyere Afram Plains government hospital in Kumawu, months after contractors moved back to the site, is appalling.

Construction of the hospital began in 2015 but work stalled in 2017 until contractors moved back to the site in February 2021.

Kwabena Mintah Akandoh spoke to the media after a tour of the project’s site.

“If the government said it could build 111 hospitals in 18 months, and they cannot finish a project which is about 65% complete in five months…..are we joking in this country. And when you are criticizing them, people call you names because you don’t belong to their party. Any reasonable government which thinks about the citizenry will prioritize the abandoned projects over new ones.”

Since the government announced its ambitious ‘Agenda 111 Project’,  many in the health space have advised the government to complete abandoned health projects before constructing new ones.

Others also accused the government of abandoning hospital projects started by the Mahama-led administration while urging the government to focus on completing the abandoned projects rather than starting new ones which have no budgetary allocations.

The Africa Centre for Health Policy (ACeHP) has for instance backed such calls.

However, the Minister of Health, Kwaku Agyeman Manu has denied such concerns insisting that the government has never abandoned any health project started by the previous government.

The government has said it was actively pursuing the completion of some abandoned hospitals aimed at tackling the health crisis the country faced.

President Akufo-Addo had said his government was working to complete abandoned infrastructure in the health sector.

He said although there are difficulties in working on abandoned infrastructure as new ones are being put up, the government remains committed to completing them to improve the quality of health service delivery in the country.

Akufo-Addo noted that the incident of having many uncompleted and abandoned health facility projects is a sign of “underdevelopment” that has plagued the country for many years.

“We have problems of numerous structures at various stages of completion that cannot be finished and brought to use because new structures are being started and there is no money to finish the ones started earlier. Again, this is a long-standing problem that is a mark of our underdevelopment. We will not ignore or sweep the problem under the carpet, and we are dealing with it, and we will complete them,” he said.