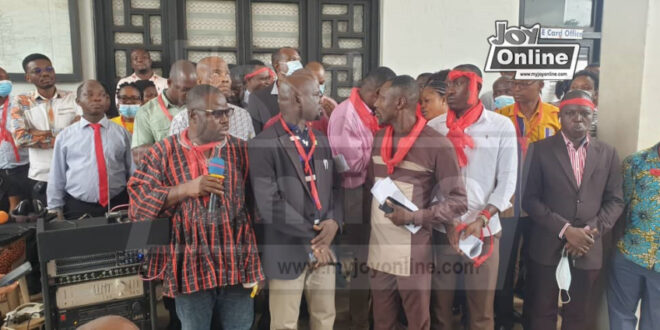 Senior staff of the country’s public universities have declared a strike today.

At a news conference at the main entrance of the University of Ghana, members of the Senior Staff Association of the Universities of Ghana were asked by their leadership to “go home.”

The Association joins a tall list of public sector labour unions who have embarked on strike demanding Cost of Living Allowance (COLA), calculated as 20% of basic salary.

They are also unhappy that accrued interest on Tier 2 pension arrears has not been paid.

The members are also worried about what they describe as university salary disparities.

At the news conference today, General Secretary of the Association, Hector Owoahene-Acheampong, said senior staff in the public universities are unfairly treated, and the time is now to have their demands met.

The two associations have accused government of betrayal of trust for asking them to call off their strike before negotiations.