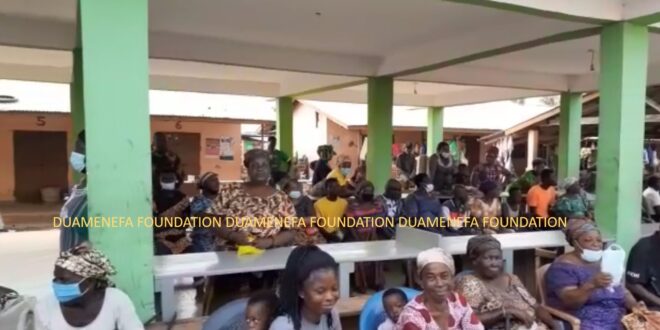 Crowds of people who came to join Duamenefa

Agbozume in the Ketu South Municipality of the Volta Region witnessed a horrific scene on Tuesday the 1st day of March, 2022 during the ongoing voluntary registration of membership for the Duamenefa Foundation of Fafaa 100.3 FM.

The Duamenefa Foundation of Fafaa 100.3 FM is Non-Profit Organization with the mandate to promote peaceful coexistence of people in their various communities through registration of volunteers.

The foundation has on its  records over 25,000 volunteers across 220 communities in the Volta Region, ref www.duamenefafoundation.org/membership.

The volunteers of the various communities supports the foundation to promote peaceful coexistence in key areas of organized community fun games, promotion of youth and sports, single parents empowerment, educational support fund,  vocational training program for the vulnerable among others.

Volunteers of Nogokpo and Agbozume communities also express their interest to join the movement to promote same in their communities, but on the occasion of Nogokpo, one Mr. Agbodzalu together with boys unilaterally stopped the team from entering the community, an action the NCCE director of Ketu South,  Madam Klokpodzi described as an affront to the 1992 constitution of Ghana.

Mr. Papaa Atoklo allegedly claimed he was instructed by Togbi Adama to contract gang of hoodlums of Agbozume to throw stones and wield machete to butcher the registration officials during the exercise.

According to Hon. Nenem,  former assembly man of Agbozume electoral area, when interviewed on Fafaa 100.3 FM,  he says he accosted Papaa Atoklo and his group to stop this nefarious activity, but Papaa,  the leader of the group claimed that they were sent by Togbi Adama to cause confusion and disrupt the activities of the Foundation.

It took the timely intervention of the Duamenefa professional security officer to disarmed Papaa Atoklo, who attempted to butcher the officials and in the process he ran away leaving his slippers behind.

Although he missed his targets, he succeeded in using the machete to destroy the plastic chairs where the Duamenefa registration officials sat.

The Agbozume police officials came in to fire warning shots to disperse the alleged messengers of Togbi Adama.

Togbi Agboka,  whose traditional jurisdiction the registration was taking place bemoaned the nefarious activities of the hoodlums.

STONES BEING THROWN DURING THE AGBOZUME REGISTRATION

Togbi Agboka lamented on Fafaa FM that,  he personally invited the Duamenefa  Foundation of Fafaa FM to the community for the exercise in the interest of peaceful coexistence and he was surprised why Togbi Adama would allegedly send hoodlums to attack the group.

When Togbi Adama was contacted to respond to the allegations being levelled against him, he refused to comment and threatened the reporter not to call his line again.

Mr. Francis Gota, former director of NCCE Ketu, called on the Agbozume Police to invite Papaa Atoklo,  the machete wilding man, his group and Togbi Adama who allegedly contracted the hoodlums for this dangerous assignment  for further investigation and possible prosecution in a court of competent jurisdiction.

Hon. Godson Ahiamadzie,  the current assembly man of the electoral area who is also a member of the organization for the registration made a formal report to the Agbozume police.

Watch out for further developments. ………….