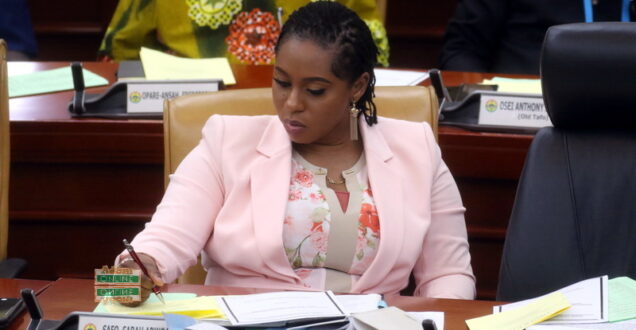 It has emerged that Dome-Kwabenya MP, Sarah Awdoa Safo, has requested another leave extension from Parliament.

Majority Leader in Parliament, Osei Kyei-Mensah-Bonsu, who revealed this, explained that the extension was contained in a new letter the legislator sent.

“What I can say now is that on Wednesday, she brought a letter, asking for four weeks extension. She explained that her injured child is still responding to treatment.

“I cannot say whether she is okay herself or not since I am not there with her,” he disclosed on Accra-based Neat FM.

According to him, the letter dated Monday, February 28, was addressed to the Speaker, Alban Sumana Bagbin with him on copy.

“I cannot say if the Speaker has agreed to the extension or not and I haven’t had any discussions with the Speaker too,” the Parliamentary Affairs Minister added.

On October 6, last year, President Akufo-Addo extended the leave of absence from office, for the Gender Minister.

The MP’s leave, which she sought for personal reasons, was supposed to have ended on August 31, 2021.

However, the former Procurement Minister was unable to resume and requested an extension. It did not, however, state when she will resume.

“In her absence, and until further notice, President Akufo-Addo has directed the Minister for Sanitation and Water Resources, Cecilia Abena Dapaah, to act as caretaker Minister,” the presidency said.

The lawmaker has come under fire for neglecting her parliamentary duties amid speculations that she has vowed not to return until given a leadership role in the House.

Miss Adwoa Safo was last seen in Parliament in December 2021, when she appeared in the House to dismiss claims by the Minority Caucus that she was impersonated.

She has since not returned to the Chamber. Her action has infuriated her colleagues who have accused her of blackmailing government with a list of demands, including the Deputy Majority Leader post.

This has infuriated some colleague MPs and members of the NPP who are calling for her removal.

Meanwhile, the First Deputy Speaker, Joseph Osei-Owusu has indicated that the Majority Caucus does not factor Dome-Kwabenya MP, Sarah Adwoa Safo, into its deliberations.

According to the Bekwai MP, all avenues to get the absentee MP to return to the House have proved futile.

As a result, the Majority in Parliament has resolved to conduct parliamentary business, going forward, without recourse to the Dome-Kwabenya MP.

Speaking on Kumasi-based Pure FM, Mr Osei-Owusu said, “in our strategy, we have taken it as going to rescue a kidnapped person, you presume she is dead, but if you go and she is alive, then it is God’s grace, and it adds to your gains, so that is our approach.

“So as it stands now, we don’t count her as part of us,” he stated.

The governing New Patriotic Party (NPP) leadership has admitted that the Dome-Kwabenya MP’s absence is affecting the party and government business.

He also mentioned that the party is currently considering measures including triggering the constitutional provision to remove her as MP and declare her seat vacant.