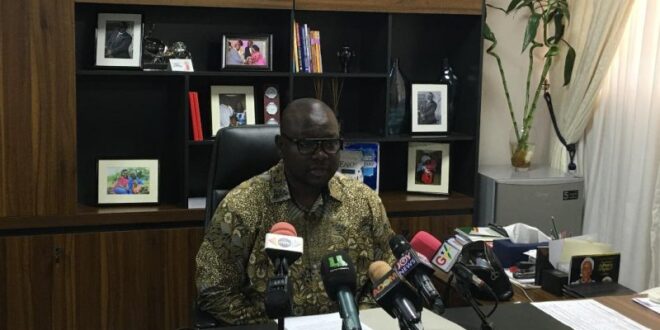 Accra, Nov. 9, GNA — Mr Francis Asenso-Boakye, Minister of Works and Housing says work has commenced on the construction of the second phase of the Blekusu Coastal Protection Project.

He said the scope of work would entail the construction of 37 armour rock groynes, with land reclamation covering a minimum coastal stretch of 8,000 metres (8 kilometres) to protect beaches and communities against encroachment by the sea.

This comes at the back of a tidal wave that hit some communities in the Keta and Ketu South Municipalities over the weekend, leaving hundreds of residents displaced.
A similar incident occurred in June this year when five communities-Agavadzi, Salakope, Adina, Blekusu and Amutinu-were hit by tidal waves, causing destruction to hundreds of property and displacing more than 1000 residents.
In a press briefing in Accra, the Minister, said the project would ensure the total protection of the people of Agavedzi, Salakope, and Amutsinu and other communities within the Ketu South Municipality of the Volta Region who were occasionally affected by tidal waves.
He said in addition to protecting lives and property, the project would protect the beaches and its environs against encroachment by the sea, arrest the current environmental deterioration, mitigate the social and economic consequences of beach erosion, and strengthen the economic and production base of the area through enhanced fishing activities.
Mr Asenso-Boakye said the Ministry had finalised evaluation of relevant proposals to hit the ground running.
He said the Ministry of Finance was currently engaged to raise the funding for the project, adding that, he was hopeful the project would feature in the 2022 Budget.
The Minister said in April 2021, a technical team from the Hydrological Services Department of the Ministry, upon his directive, travelled to the affected communities to engage the Ketu South Municipal Assembly and some community leaders on the matter of the implementation of the second phase of the project.
Mr Asenso-Boakye said he also visited the communities with the technical team from the Ministry and the Hydrological Services Department in June this year to have a first-hand understanding of the situation.
He appealed to the coastal residents to avoid any practices that exposed them to unexpected changes of the rising sea levels.
“There have been reported cases of sand winning, uprooting of mangrove along the coastal stretch.
The investments by government cannot yield the needed protection if people continue to engage in such practices,” he said.
Meanwhile, National Disaster Management Organisation (NADMO)in Keta and Ketu Municipalities told the Ghana News Agency they had assessed the situation and liaising with the national office for support.
GNA
Source: www.gna.org.gh
2021-11-09
fafaafmonline_editor