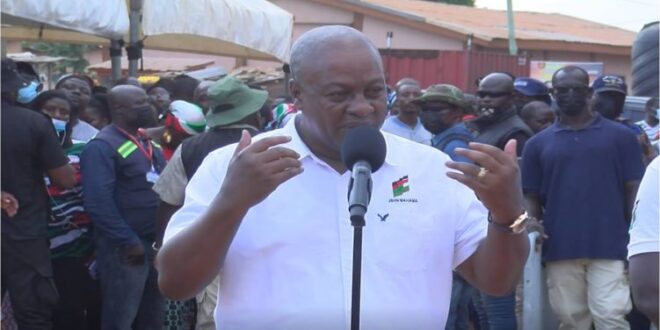 Former President John Dramani Mahama has described the NPP’s response to the recent comments by the Catholic Bishops Conference as due to the arrogance of power.

On Monday, November 8, the Catholic Bishops Conference at a plenary assembly of the Association in Wa, criticized the government over its failure to protect the public purse. The clerics also bemoaned what they described as a lack of empathy from the government towards Ghanaians.

Reacting to this, the Director of Communications of the NPP, Yaw Buabeng Asamoah, argued that the criticisms from the clerics lacked focus and clarity; and therefore called on them to be specific.

However, addressing a durbar of party faithful at Ashaiman, as part of his two days tour of the Greater Accra Region, John Mahama accused the NPP of being unreceptive to criticisms.

“If they are saying Ghana is hard, do the things that will make things more affordable for the people of Ghana. But that is what we call the arrogance of power. They said when the gods want to destroy you, they first make you mad. Because this is madness. The Catholic Bishops have spoken; what is your business holding a press conference against them? Accept criticism in good faith”, The former President said.

Recounting criticisms against him during his tenure as President, John Mahama said there were many press conferences by the Catholic Bishops Conference and other concerned groups that criticized his regime and policies as President.

According to him, he welcomed such feedback in good faith, therefore does not see why the NPP would arrogantly react to the Catholic Bishops Conference, which is only demanding accountability.

“During my government, I did not do a press conference to respond to them. Whatever they said I took in good faith and I took corrective measures”, the 2020 NDC flagbearer recounted.

Having expressed his disgust at the posture of the NPP, he called on the government to address the pertinent issues raised by the Catholic Bishops Conference and Ghanaians instead of replying to criticisms.

The former President is currently on a two-day tour of the Greater Accra Region to interact with party executives and supporters of the NDC in the Region. The tour on Tuesday, took him to Dodowa, Tema, and Ashaiman.

The ‘Thank You’ tour is expected to continue on Wednesday, with a closing engagement at the Kempinski Hotel, where he will be expected to extensively address current issues in the country.