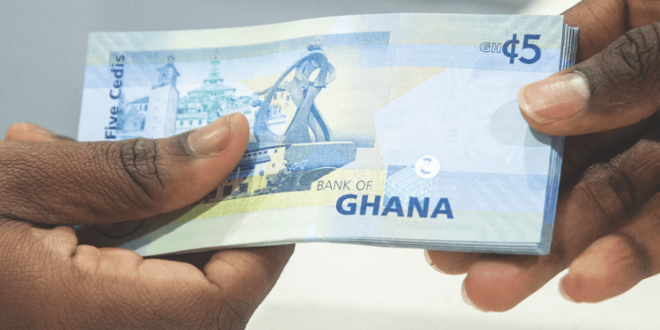 The seven factors driving high cost of living in Ghana

The average Ghanaian does not need an economics degree to know the economy is going through a very rough patch. They feel it on their commute to work and when shopping for foodstuffs.

The Ghana Statistical Service’s figures noted that the continuous increase in food and transport prices across the country has pushed the national year-on-year inflation for April 2022 to 23.6 percent.

While it is easy to point to fuel prices and the depreciation of the Cedi as contributing to the high cost of living in Ghana, there are more factors causing anguish to the pockets of Ghanaians.

This article looks at the seven factors driving the high cost of living.

The first and arguably most important factor in the prices Ghanaians face today is the exchange rate. Ghana’s economy has barely changed since the days of Guggisberg. Our economy is commodity powered, with very little manufacturing being done in Ghana. Nearly everything is imported, from refined petroleum products to toilet paper, to rice, to pharmaceuticals. This means the weaker the cedi gets, the more prices to rise as it costs more (relatively) to import any and everything. This brings us to our second point.

According to the Ghana Institute of Freight Forwarders, the freight charge for a 20-foot container from China increased from an average of USD1500 to USD3500, a 133% increase, since the start of the COVID-19 pandemic. The cost of freight has been rising globally since the pandemic began. Using January 2020 as a benchmark according to the Baltic Dry Index, global freight prices are currently 152% meaning the cost of transport has increased by that much. In an import driven economy, this is a disaster. In the same period, the Ghana cedi had also lost about 50% of its value. These two interacting factors, meaning import prices have shot up relative to our national purchasing power. The combination has been disastrous for prices.

Prices of both petrol and diesel have seen a rise from a little above GHS 5 per litre in April 2021 to an average of  GHS 10 per litre.

The main drivers of this have been the deterioration of the Cedi against the Dollar, the rise in global crude oil prices and the tax build up on the finished product which makes 29% of the ex pump price.

Fertilizer prices have gone up almost 400% since 2020. The price was already rising, but the Russia – Ukraine conflict has exacerbated the issue. From the graph below, we can see an almost 100% increase from the end of the 4th quarter of 2021 to the end of the 1st quarter of this year. The issue will only get worse the longer the conflict continues. Consumers are therefore paying more for food.

These issues whilst affecting many people have indirectly made certain prices rise even faster than usual. Inflation in April 2022 was 23.6%, the highest since August 2009 according to the Ghana Statistical Service, this was mainly driven by food. Food according to the most recent data from the Ghana Statistical Service accounts for 50% of inflation in the last month. 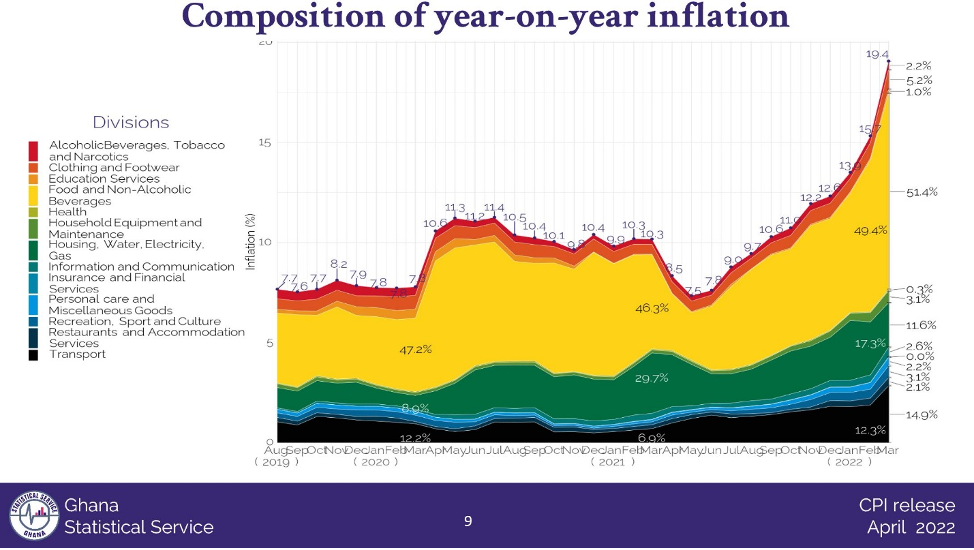 Transport fares are a huge source of concern for most Ghanaians. With less than 20% of Ghanaians owning cars, many rely on public transport for movement purposes. As fuel prices rise various transport unions, most notably GPRTU and the breakaway Concerned Drivers Union have been agititaing for higher prices as fuel prices have risen. Using January 2021 as a base in the last 17 months transport fares have risen 50%. Despite the steep increase the fares have lagged behind the fuel prices and spare parts which have also soared due to the forex and freight issues highlighted above.

Lastly, consumer goods/non food items have also seen a rise in prices. Nonfood inflation has generally lagged behind food inflation in the last year however the rises have still been significant. From July 2019 to the end of 2021 non food inflation stayed between 7% and 10% for the most part, however since October 2021 it has steadily risen reaching 17% in March and another rise is expected when the April figures are eventually released. This has meant 2022 has been disastrous for consumers as salaries have not matched the rate of inflation.