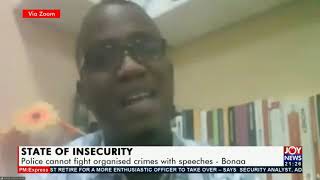 Spousal killings: Watch out for these signs – Criminologist

Criminologist, Jones Opoku Ware has urged couples to be mindful of the behaviours of their partners following the high number of cases of spousal killings in the country.

According to him, crimes such as murder is not an event but a process.

Therefore, before someone commits murder, the perpetrator goes through a number of thought processes.

“When you are with someone, it is important that you study the person’s behaviour. Before a crime is committed, there are so many considerations and thoughts before such crimes are committed.

“And normally, as the person begins to calculate such thoughts, his or her behaviour changes. So, when you are vigilant, you can pick the signals even before that person acts” he said.

Mr Opoku Ware’s comments come on the back of a number of cases of spousal killings that have been reported in the media since the beginning of the year.

Spousal killing is the intentional killing of one’s partner either by the husband or wife, boyfriend or girlfriend, or any other intimate relations.

Data from the Statistics Research and Monitoring Unit (SRMU) of the Criminal Investigation Department (CID) of the Ghana Police Service indicates that some 306 murder cases have been reported to the Police from January 1 to June 30 this year.

Reacting to the statistics on Adom FM’s morning show, Dwaso Nsem Friday, Mr Ware said there are signals to pick in order to be on guard and avoid being a victim.

He stressed the above signals are very important in order for persons to stay away from such heinous acts that may lead them to their early graves.