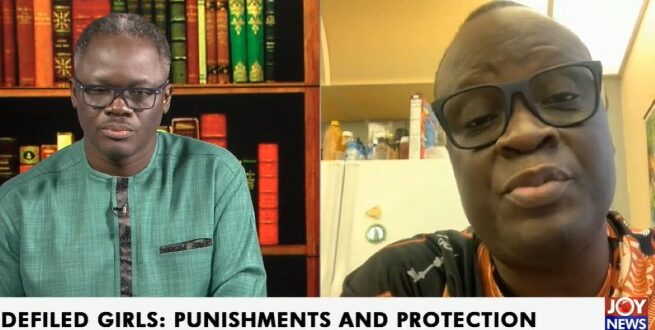 Defilement age should be extended to 17 years – Lawyer

Legal Practitioner, Ahmed Musa has called for an expansion of the scope of the law on defilement to cover 17-year-olds in the country.

According to him, because the law on defilement covers young people 16 years and below, it is sometimes difficult to punish someone for defilement if the child in question is above 16.

Thus, expanding the scope would help capture as many offenders as possible, and ensure that girls are protected from sexual predators.

“We cannot punish a person for an act which did not constitute an offence under the laws of Ghana, that is what the constitution says. So, beyond Section 101 [Act 646] it will be difficult to punish a man for the defilement of a child if the child is above 16. The scope of the law must be expanded, from say 16 years to 17 years.”

“We know that 18 years the person has become an adult. But, she is still within the teenage zone, so if you use the word teenage pregnancy and you are not even considering the scope of the law…and if they report to DOVVSU what can they do,? Because Section 101 says the cut-off point is 16 years. So we need to expand the scope of the law so that it can cast in its nest, more than we are witnessing now,” he explained

Mr Musa stated that even if a law cannot be expanded to accommodate children 16 and above, there should be a different policy that helps deal with their cases.

His comments come on the back of a report which suggests that thousands of girl-students, 16 years and below had been impregnated this year alone.

In the Volta Region, over 6,000 girls have fallen victim to defilement. Yet, few cases have been reported to the Police and prosecuted.

Meanwhile, Mr Musa believes that if the law is left as it stands without making the needed amendments, many offenders will be left off the hook.

He also called for stringent laws to compel community members to report incidents of defilement in their community.

Mr Musa said this is necessary to protect girls in society. According to him, when young girls are impregnated, the effects of the action do not only affect the girl and her immediate family but the entire society as well. Thus, it behoves every member of society to be involved in the process.

According to Ahmed Musa, creating a desk at the Attorney General’s office to deal with issues of defilement might be the boost needed in the fight against defilement and teenage pregnancies.