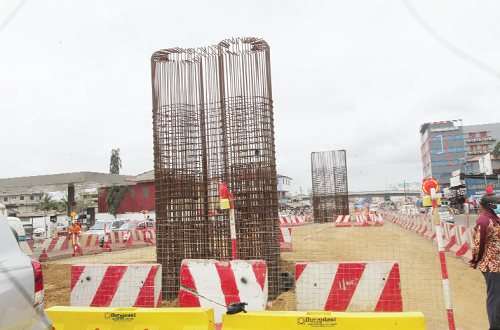 The Minister of Roads and Highways, Mr Kwasi Amoako-Atta, has expressed disappointment over the slow pace of work on phase two of the Obetsebi-Lamptey Interchange project.

Consequently, he has tasked engineers working on the project to expedite work in order to avoid delay in completing the project.

During a working visit to the site yesterday, the minister said he would not tolerate any delay from anybody and urged the engineers to keep to their schedule in order to finish the project on time.

“We have so many projects to undertake and I am not too happy with the delay here. I will not tolerate any delay from anybody because every day that we delay on a project comes at a cost,” he said.

Mr Amoako-Atta also inspected some major road projects and visited some communities with poor roads to see how best the challenges could be addressed.

Besides, he inspected repair works on the Ashaiman Overpass and the Weija Bridge that connects Ayigbe Town to Kasoa, the construction of a bridge over the Okurudu stream at Kpormottiey in the Central Region and some roads at North Legon in Accra.

Briefing the minister, the resident engineer of the Obetsebi-Lamptey Interchange project, Mr Owusu Sekyere Antwi, said the challenge with the project concerned the relocation of utility lines of the Electricity Company of Ghana (ECG) and the Ghana Water Company Limited.

He assured the minister that the construction of the Ring Road Flyover and ancillary works, which commenced on March 25, 2021, together with their accompanying projects, would be completed by March 24, 2023.

He added that so far six pillars had been constructed, while other re-enforcement works were currently underway.

Responding, Mr Amoako-Atta charged the resident engineer to expedite work on the site.

“This is a composite project and it should not delay,” he said, and queried: “If we finished phase one in record time, why should phase two delay?”

“No technical person from my ministry or any other agency should attempt to slow us down,” he added.

The minister assured the engineers on the project that the government was committed to ensuring that the it was completed without delay, for which reason he would not tolerate any further delay.

At the Devtraco Villa in Tema Community 18, the minister met the leadership of the residents association to appreciate the gravity of the damage caused by floods in the community.

He commended the leadership for initiating steps to improve the condition of roads and prevent flooding in the community.

Mr Amoako-Atta said his ministry was ready to provide technical support for private firms in the real estate sector, especially estate developers who were willing to begin the construction of their own roads, adding that the government would take charge of the maintenance works, even after the developers had sold the houses.

At Weija, the Municipal Chief Executive (MCE) for the Weija-Gbawe, Mr Patrick Kwesi Brako Kumor, discussed with the minister plans to evacuate some residents whose buildings had blocked the demarcated site for the construction of a 50-metre bridge from Weija to Ayigbe Town.

The resident engineer, Mr Joseph Clottey, told the minister that by next week, engineers would lay the main metal works for the construction of the bridge after the affected persons had been compensated and vacated the land.

Mr Amoako-Atta announced that effective September this year, the ministry would, on a monthly basis, update the citizenry on progress of work being undertaken for the public to be abreast of the state of projects in their respective communities.

He said he would commence the briefing with the bridges being constructed, followed by interchanges, asphalt overlays, among other specific aspects of roads.

Later, while speaking with the Daily Graphic, the minister said he was generally impressed by progress of work at the various sites where projects were ongoing in the country.

He said budget had been made available for 50 steel bridges across the country, out of which 37 were at various stages of completion.

He charged the public to protect state property, including roads, and ensure discipline on the roads.