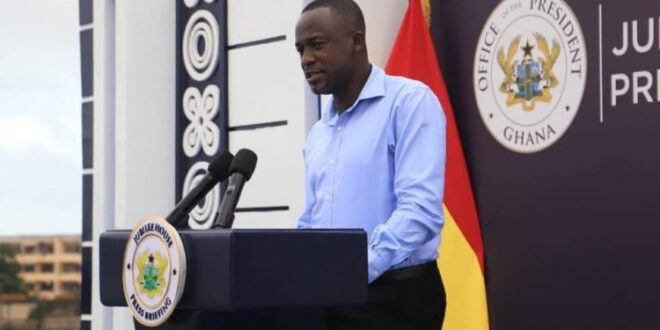 The Director of Communications at the Presidency, Eugene Arhin, has said President Nana Addo Dankwa Akufo-Addo will soon announce a decision on the current closure of the country’s borders.

Mr. Arhin said whatever decision the President will take on the matter will be done in consultation with the  COVID-19 National Response Team.

He made this known on Monday, August 30, 2021, when he addressed the presidential press corps at the Jubilee House.

The continuous closure of the borders has become an inconvenience for many, especially residents of the Ketu South Municipality in the Volta Region, who recently embarked on a demonstration demanding the reopening of the border.

The residents who engage in economic activities in and outside Togo and on the border with Togo, are of the view that the land borders ought to be opened to protect their livelihoods as gas been done for land and air borders.

They thus called on the government to open the land borders since they play important role in their economic activities.

While addressing the press corps, Mr. Eugene Arhin said President Akufo-Addo understands the difficulties the restrictions have brought on the people living in such areas, adding that the President will review whatever aspect of the restrictions that necessarily needs a review.

“President Akufo-Addo understands the difficulties people have had to go through the restrictions that have been imposed on lives and livelihoods, and I believe if there is the need for them to review whatever aspects of the restrictions, he will make it known when he addresses the nation.”