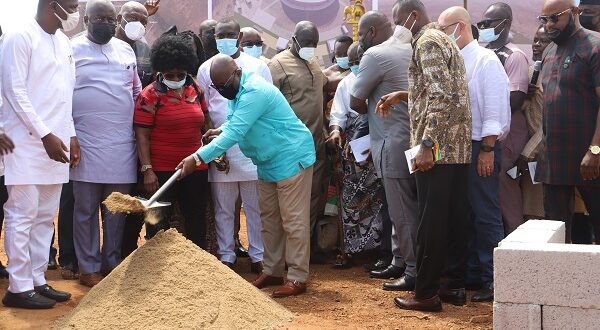 President Nana Addo Dankwa Akufo-Addo on Tuesday cut the sod at Borteyman in the Greater Accra Region for the construction of sports infrastructure to host the 13th African Games 2023 in Accra.

He says the 100-acre Borteyman structure will be equipped with facilities in accordance with International standards capable of hosting any International competition.

This is the first time Ghana is hosting the African Games which started in 1965 in the Republic of Congo.

Others are a 500 seater temporary dome for handball, volleyball, Judo, karate and Taekwondo and a five tennis court complex, including a 1,000 seater Centre Court.

The rest are a six-lane warm up athletics extract, a one FIFA standard football training field and the six kilometers single lane road and a three kilometer double lane road.

He stated that the facilities to be constructed at the University of Sports Development include lecture halls, students’ hostels, lecturer bungalows and academic facilities.

The total investment is $195 million, however the initial phase of the development at Borteyman was budgeted at $145 million.

Hybrid
President Akufo-Addo indicated that under the circumstances, government had decided to adopt a hybrid system of facility development where it would upgrade existing infrastructure in Accra to supplement new ones to be built in Borteyman.

The original plan was to construct all the sports facilities for the African Games and it was to comprise a 50,000 capacitor Olympics stadium complex for the opening and closing ceremonies as well as for the athletic league, football competitions.

He noted that the University of Ghana, Legon Sports Stadium will be upgraded to International standards for some events of the African Games.