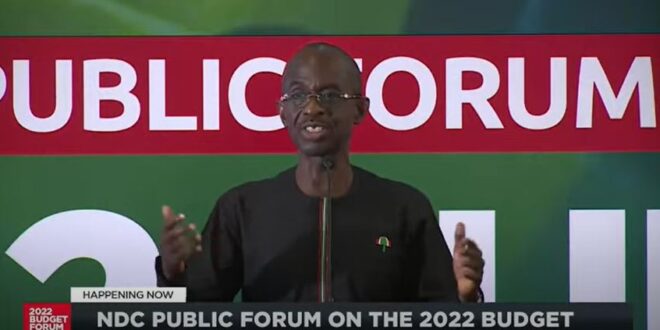 The opposition National Democratic Congress (NDC) says the recent arrest and detention of some journalists in the country is an attempt by the government to instill fear in Ghanaians opposed to the E-levy.

According to the NDC, the government is orchestrating the arrests to douse the impact of the ‘Yentua Demonstration’ against the E-levy.

“The NDC assures the despotic regime of Akufo-Addo, that we shall not relent in our effort both within and outside Parliament to stop the introduction of e-levy,” the party said in a statement issued on February 11, 2022.

In the last few weeks, three journalists have been arrested and subsequently prosecuted by the police for various alleged offenses while one other was allegedly assaulted by police officers in the Western Region.

This, the NDC said is contradictory to the ‘President’s claim’ as a human rights activist.

“There has been sharp deterioration in the expression of the right to free speech under the Presidency of a personality whose claim to fame as a human rights activist, was his work on the repeal of the Criminal Libel Law when he was an Attorney General. Recent events, however, exposes the duplicity and hypocrisy of Mr. Akufo-Addo. In short President Akufo-Addo speaks from both sides of his mouth,” the party said.

The statement added that “we are deeply worried by the loud silence of the moral society, large section of Civil Society Organisation and rather surprisingly the Ghana Journalists Association, whose members are under siege.”

The NDC further called on Civil Society Organisations and the Ghana Journalist Association to speak against the recent police arrests and detention of journalists.

Onua TV’s Morning Show host, Blessed Godsbrain Smart was detained by National Security Operatives after he had been granted bail by the court following his arrest over extortion.

He was detained along with another staff, Eric Dadzie Copperfield, popularly called DJ GH Boy who is also facing charges of abetment to extort.

On February 8, 2022, a journalist with Power FM, Oheneba Boamah Bennie was handed 14 days jail term over his claims against President Akufo-Addo and judges.

He was arrested on December 14, 2020, by the Criminal Investigation Department (CID) of the Ghana Police Service for threatening and insulting President Nana Akufo-Addo.

The Attorney General, Godfred Dame, subsequently charged him with contempt.

A journalist with Takoradi-based Connect FM, Eric Nana Gyetuah was allegedly assaulted by five policemen at a popular restaurant on Thursday, February 3, for taking pictures of some suspects in the company of police officers.

The suspects are believed to have killed a returnee from abroad two years ago, in the Western Region.

Upon noticing that Nana Gyetuah had taken shots of the suspects, the officers confronted him and demanded that he deleted the photos.

According to reports, the journalist refused to comply, thus leading to the angry cops allegedly beating him to a pulp.

The most recent is the case of Accra FM’s Bobie Ansah who was was picked up by persons purported to be National Security operatives on Thursday night after he had ended his show.

The Broadcaster was later charged with the publication of false news and offensive conduct. He has since been granted bail to the tune of GH¢50,000 with two sureties.

A police report sighted by myjoyonline noted that Mr Bobie Ansah on January 1, this year, accused the presidential spouses of granting themselves “state lands at AU Village, around the Kotoka International Airport for the construction of Rebecca Foundation”.

The police said the presenter further called the First Lady, Rebecca Akufo-Addo “a thief and that she has stolen state land around the Kotoka International Airport,” a statement he knew was “likely to occasion the breach of peace”.

According to the Police, Kwabena Bobbie Ansah’s arrest “became necessary after he turned down several invitations from the Police to him and others involved in the case to assist with investigations.”