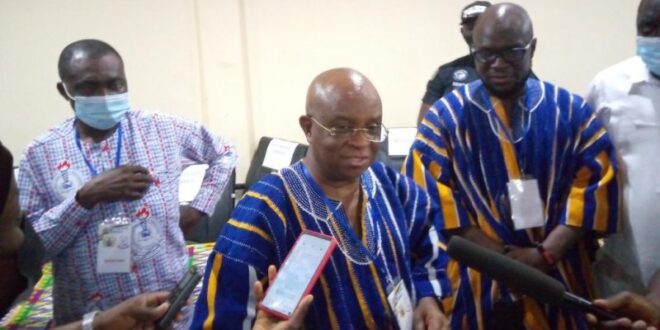 Our success rate not too bad – Volta Minister on nominee confirmation

The process which saw the conduct of ballots in three Municipal and District Assemblies (MDAs) in a day and took six days to complete in all 18 MDAs, witnessed the rejection of five of the nominees and the endorsement of the remaining 13.
Speaking to the media at the end of the process at Anloga, Dr Letsa said though some nominees were rejected, 13 were confirmed with quite a number of them receiving hundred percent endorsement, which implied that “our success rate is not too bad”.
He said out of the five rejected, three nominees from Adaklu and Akatsi North Districts and Ketu North Municipality suffered outright rejection and noted that a report would be compiled and sent to the Presidency for a decision to either withdraw or re-nominate them for a second ballot.
On the other two nominees from Agotime-Ziope and Anloga Districts who failed to poll the mandatory two-thirds of the votes, Dr Letsa indicated that the second ballot would be conducted on them in the next few days.
The Regional Minister in his reaction to the question of revocation of previous government appointees from some MDAs with the information on same being communicated to the affected appointees on the day of confirmation, he said such revocations were necessary to ensure a successful process.
Some bigwigs of the ruling New Patriotic Party (NPP) in the Region including Mr Makafui Kofi Woanyah, Regional NPP Chairman and who was Works Committee Chairman at the Keta Municipal Assembly; and Mr Samuel Doe Haligah, Ketu South NPP Constituency Chairman and former Presiding Member of the Ketu South Municipal Assembly had their appointments revoked.
Thursday’s confirmation exercise, which was personally supervised by the Regional Minister and facilitated by the Electoral Commission under the watch of security agencies, with Members of Parliament, past and confirmed MDCEs, Regional Executives of NPP, traditional leaders and staff of the MDAs in attendance, was not without drama.
At Ketu South, the revocation affected all 18 government appointees; affected nine of the total 10 at Keta while at Anloga, 11 out of the 13 had their appointments revoked leading to delays in the start of the process in the coastal assemblies.
Source: www.gna.org.gh
2021-10-09
fafaafmonline_editor