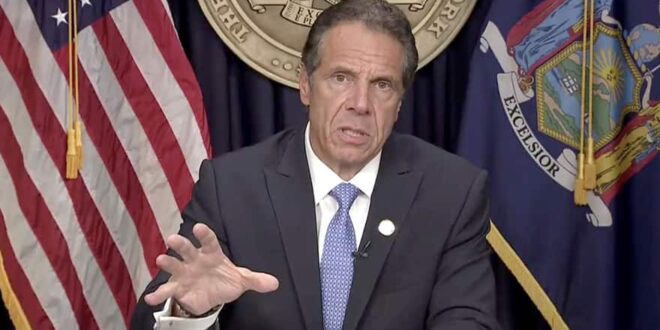 New York Gov. Andrew Cuomo has announced his resignation a week after the release of a damning report about allegations of sexual misconduct, which heightened calls for him to step down. 1:57

New York Gov. Andrew Cuomo announced his resignation Tuesday, saying he didn’t want the state government consumed by months of investigations into his personal behaviour amid allegations of sexual harassment.

Cuomo’s future in his third term as governor came into doubt after the release last week of a 168-page report written by two independent attorneys selected by the state attorney general that included detailed allegations of Cuomo sexually harassing 11 women. In a television interview Monday, one of the women — an executive assistant in the governor’s office — detailed experiences in which Cuomo allegedly groped her.

It appeared that a majority of New York State Assembly members were in favour of proceeding with an impeachment trial in light of the report.

“Given the circumstances, the best way I can help now is if I step aside and let government get back to governing,” he said.

Cuomo said the resignation would be effective in 14 days.

He apologized for his behaviour but said the most serious allegations in the report “have no credible, factual basis.”

“In my mind, I’ve never crossed the line with anyone,” Cuomo said. “I didn’t realize the extent to which the line has been redrawn,” he added, referring to generational and cultural shifts in interactions between men and women in the workplace.

Investigators said he subjected women to unwanted kisses, groped their breasts or buttocks or otherwise touched them inappropriately, made insinuating remarks about their looks and their sex lives and created a work environment “rife with fear and intimidation.”

Lt. Gov. Kathy Hochul, a 62-year-old Democrat and former member of Congress from the Buffalo area, will soon become the state’s 57th governor and the first woman to hold the post.

Read the report from the office of the attorney general:

In announcing his resignation, Cuomo did not strike the defiant tone seen last week after the report was released. However, his lawyer Rita Glavin preceded his announcement with a lengthy news conference taking exception to many of the claims in the investigation that had been commissioned by Letitia James, the state attorney general.

“Today closes a sad chapter for all of New York, but it’s an important step towards justice,” James said on Tuesday. “I thank Gov. Cuomo for his contributions to our state. The ascension of our lieutenant governor, Kathy Hochul, will help New York enter a new day.”

Fall from grace in just over a year

Cuomo had earned plaudits as his state was devastated in spring 2020 by the pandemic for his compassionate but blunt approach in daily briefings, a time period in which he was also serving as the chair of the National Governors Association. But it was later learned that the governor’s office hadn’t been entirely forthcoming about data on nursing home deaths, and allegations into his interactions with women began to surface.

The result of the report last week proved too damaging, with state and federal Democrats — including President Joe Biden — calling on him to step down. On Sunday, Melissa DeRosa, one of his most fierce defenders and strategists, announced her resignation.

White House press secretary Jen Psaki said Tuesday that President Joe Biden did not speak with Cuomo before his resignation and Cuomo did not give the administration advance notice.

As a result of Cuomo stepping aside, the Democrats will have a wide open primary next year in the runup to the gubernatorial election on Nov. 8, 2022. Democrats have held the office for 36 of the past 47 years, and Cuomo won relatively easy election victories.

Cuomo’s father, Mario, governed for much of the 1980s. After working on his father’s campaigns, Cuomo served as housing secretary in Bill Clinton’s administration in the 1990s before returning to state politics.

He still faces the possibility of criminal charges, with a number of prosecutors around the state moving to investigate him.

The current scandal also led to difficult questions for CNN, which employs Cuomo’s brother, Chris, in a high-profile primetime slot. It was learned that Chris Cuomo had helped advise his brother on a communications strategy after women came forward with allegations of sexual harassment.

As well, the U.S. Justice Department is investigating the state’s handling of data on nursing home deaths and the state attorney general is looking into whether Cuomo broke the law in using members of his staff to help write and promote his book, from which he stood to make more than $5 million US.

For the state, Cuomo’s announcement is the latest in a line of recent resignations involving a high-profile politician.

Gov. Eliot Spitzer resigned in 2008 after it was learned he frequented escorts, former congressman Anthony Weiner went to prison for sexting with a 15-year-old girl and state attorney general Eric Schneiderman stepped down in 2018 after four women accused him of abuse.