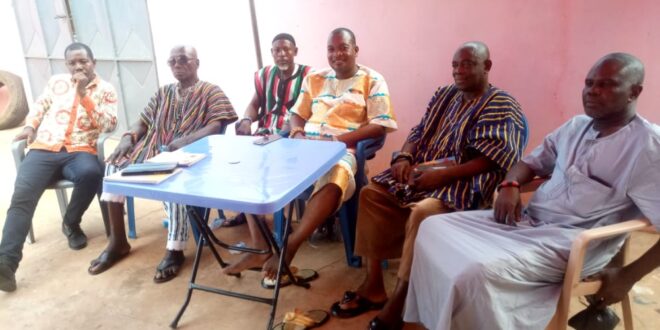 The Chiefs and people of Wheta – Atiteti Traditional Area of the Ketu North Municipality of the Volta Region of Ghana were thrown into a state of shock and dismay when Mr. Lihor Adalekporshie Klevor, allegedly threatened the traditional arbitration court of Hon. Togbi Adjei III, “to discontinue the traditional arbitration” where his nephew is accused of using his palm to wipe the face of a woman resulting in alleged mental disorder of the victim.

It would be recalled that Mr. Richmond Klevor, his nephew, had earlier admitted to the court that he used his palm to rub the face of the victim, an action considered as spiritual incarceration of the victim.

Mr. Klevor allegedly use this unlawful opportunity to impregnate the woman without the consent of the parents. This came to light when the woman started behaving abnormally by shouting and mentioning the name of the accused to free her from the hook of the spirits.

The family of the victim earlier summoned the accused before the traditional court of Togbi Adjei III, but the panel of jurist referred the case to Pantang Specialist Psychiatric Hospital in Accra for medical attention.

According to the chairman of the arbitration committee, the results suggested that the sickness could not be diagnosed physically, hence the accused was summoned to exorcise his gods to free the victim.

This day was set aside for completion of the traditional exercise, but Mr. Adalekporshie cunningly carried his threat and walked away with the accused.

Togbi Adjei III therefore reported the matter to the police and Mr. Adalekporshie was picked by the police for allegedly threatening the chiefs. He is in the grip of Dzodze Police Division for further investigation and possible prosecution in a court of competent jurisdiction for threat.

Watch out for further development…………..