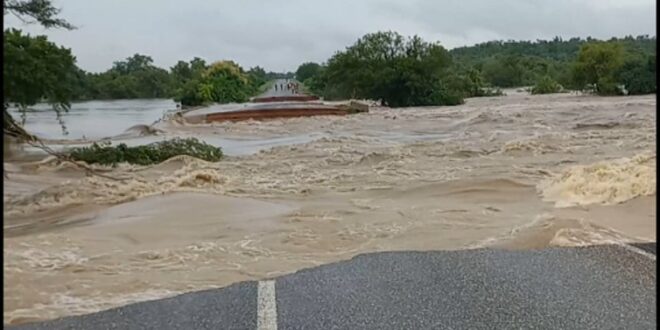 The Director of the National Disaster Management Organisation (NADMO) for the Upper West Region has lamented the misfortune following the downpour on Thursday.

Mr. Mustapha Ahmed described the day as one of the region’s saddest after numerous vehicles, motorbikes, and tricycles were swept away with several passengers left stranded on the Wa-Nadowli- Babile, Nadowli- Jirapa and Sombo- Duong Highways.

He revealed to JoyNews that due to the magnitude of the flood, his officers have been unable to record the damages.

‘‘You can see that we are stuck. We can’t cross to the other side let alone assess the damage and see the support we can give them. We are on standby but for now, our hands are tied at our back,’’ he bemoaned.

‘‘We are in a mess; this is the saddest day for us in the Upper West Region,” the NADMO Director further added.

A team from the region’s Ghana Red Cross Society was dispatched to the scene. They, however, were unable to do much due to the severity of the matter.

The Regional Coordinator, Jeremiah Afako said his men could not cross the flood.

According to some residents, such catastrophe has not been seen in the region in many years.

Others also fear that their farms, located in the enclaves may have submerged under water.

A resident, Stella Mwinyella boarded a commercial bus from Wa heading to Lawra but got stranded upon reaching Goriyiri at 7 am.

Meanwhile, the Upper West Regional Minister, Dr. Hafiz Bin Salih is expected to fly to the affected areas with NADMO officials on a helicopter to assess the extent of the disaster.