Breaking News
Home / BUSINESS / Inflation inches up to 9% in July 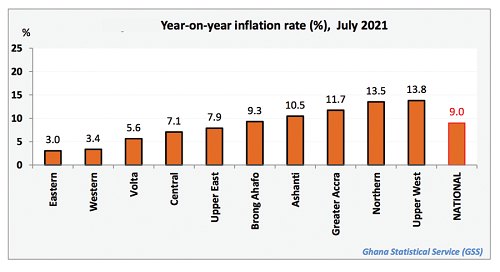 Inflation inches up to 9% in July

Inflation for July inched up to nine (9) per cent, up from the 7.8 per cent recorded in June.

This was largely driven by the food sub-sector which contributed 47 per cent to overall inflation.

This was followed by the transport sub-sector which also contributed 14.3 per cent.

The Government Statistician, Professor Samuel Annim, who announced the figures at a press conference in Accra on Wednesday said “more than three-quarters of the rate of inflation recorded in July 2021 was contributed by food and non-alcoholic beverages; housing, water, electricity and gas and Transport.”

The inflation which is determined by the Consumer Price Index (CPI) measures changes overtime in the general price level of goods and services that households acquire for the purpose of consumption.

Inflation for locally produced items continues its dominance over inflation for imported items by widening the gap between the two.

While inflation for locally produced items was 9.4 per cent and that for imported items was 7.1 per cent.

At the regional level, four regions recorded inflation rates above the national average of 9.0 per cent.

As a result, Greater Accra’s persistent record of highest for 16 consecutive months has been halted.