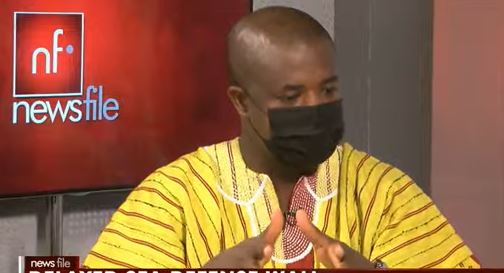 Member of the NDC legal team, Godwin Edudzi Tamekloe, has asked the leadership of the Majority Caucus in Parliament to apologise to the people of Keta for blaming the recent tidal wave on sand-winning activities in the community.

Speaking on JoyNews’ Newsfile on Saturday, November 13, 2021, the lawyer condemned an attempt by the Deputy Majority leader, Alex Afenyo-Markin, to reduce the conversation on the issue to sand winning and “also to corroborate that with a fictitious picture.”

“I am completely disappointed with the attempt by Afenyo-Markin and the team he led yesterday in trying to reduce the conversation to the issue of sand-winning,” he said.

A photo used by the Majority Caucus in Parliament on the issue of tidal waves, which has devasted communities in the Volta Region, nearly started a fight between the two sides at a press conference on Friday.

Deputy Majority Leader, Alexander Afenyo-Markin showed alleged photos from the scene of the disaster to the press. This was to back his assertions that, the tidal waves that had ravaged communities such as Abutiakope, Kedzikope, and Keta Central in the Volta Region are due to sand winning.

According to them, his claim that the picture depicts the current state of the Keta coastal area and was taken at the scene was untrue. Fact checks have confirmed that the photos are indeed from Sierra Leone and not Keta.

During the show, Mr Edudzi Tamakloe noted that this move by Mr Afenyo-Markin “demonstrates a certain lack of thoroughness as the majority side wanted to cause a certain mischief obviously against the people.”

He also believes that the Deputy Majority Leader’s action is the result of government’s failure to visit the area to have a proper assessment of the situation.

“Anyone who has an appreciation of the area cannot be blaming what has happened in the community on sand winning,” he said.

Moreover, “there is no scientific basis or research finding to establish that the incident was due to the activities of sand winning,” he added.

He, thus, called on the Leadership of the Majority Caucus to apologise to the people, insisting that “what they did was wrong. And if they have a solid research team, they can have a proper briefing about the state of affairs at the place now.”