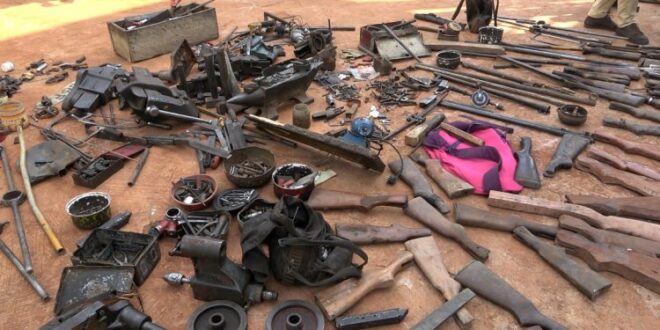 The Bono East Regional Police Command has arrested five persons alleged to be in the business of illegally manufacturing guns in Kintampo.

The arrest followed an intelligence-led operation aimed at breaking into the criminal enterprise in the region.

A statement from the police said several implements used for manufacturing weapons have been retrieved from two “criminal enterprises.”

Manufacturing guns without appropriate licenses in Ghana is against the Arms and Ammunitions Act of 1972.

The Public Relations Officer for the Bono East Regional Command, ASP Amponsa Bosie Dankwa, said 43 pieces of gun butts which were to be turned into fully functioning riffles, gun barrels, and ammunition were confiscated from the criminal enterprises.

“22 short pieces of wood and other implements used in the manufacturing of weapons were retrieved from suspects Akordzi Emmanuel, Abdul-Rashid Sumani, and Abdul-Fatawu Issaka. However, suspects alleged that they were keeping the exhibits for their master, one Yahya now at large.”

“Suspect Ibrahim Kadr also mentions suspect Richard Duako as the owner of the exhibits which were retrieved from him. Presently, all suspects are in custody and the exhibits have been retained for further investigations,” he noted.

Last week, Kwesi Bayele, a 25-year-old young man, was arrested for allegedly manufacturing and dealing in illegal firearms in the Bono East Region.

During a search, the Police retrieved 20 ammunitions including; locally-manufactured long barrel guns and pistols at his residence at Zambrama, near Kwame Danso in the Sene East District of the region.

He is a key suspect in manufacturing and supplying firearms to most criminals and armed robbers in the region, and until his arrest, the suspect had been dealing in illegal firearms at Gulumpe in the Kintampo North Municipality.

“In fact, we gathered that he supplied the ringleader of an armed robbery syndicate, Issah Seidu, who was arrested in August this year with guns and ammunition to operate”, DCOP Atibilla indicated.