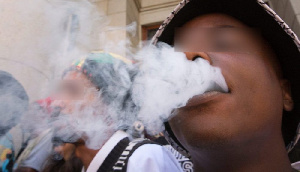 Reports in the local media indicate that five wee smoking ghettos at Kasoa in the Central Region have been
razed down by fire.

According to a report by Accra-based OKAY FM’s Jacob Kubi, the cause of the fire is not readily known.
However, grapevine information indicates that a member of the wee smoking community who is peeved by
the arrest of some colleagues torched the base.

Jacob Kubi reports that no life was lost but wee running into millions that have been lost due to the inferno.

However, the fire service according to reports was swift to prevent the fire from spreading further to some
stalls which are closer to the ghettos.

Police and the fire service have since started an investigation to ascertain the cause of the inferno.