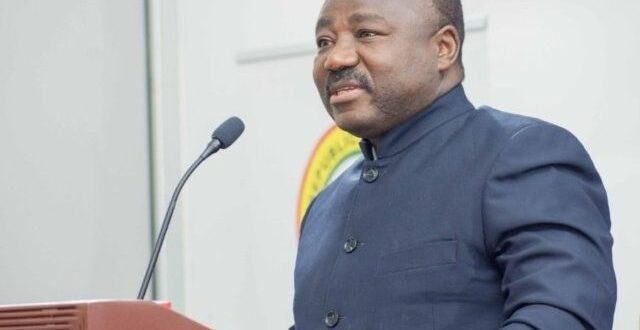 It has called on the Office of the Special Prosecutor and the Economic and Organized Crime Office (EOCO) to quicken their probe into the various crimes levelled against the embattled former PPA boss.

The demands of GII are coming after, CHRAJ investigated Mr. Adjei and found him guilty of conflict of interest in the performance of his duties after sidestepping procurement procedures for personal gains.

In a statement issued by the GII, it commended CHRAJ for a “dispassionate and thorough work done”.

It also called on OSP and EOCO to fast-track the criminal investigation aspect of this case.

“Where culpability is established, the law should be made to go its full length to serve as a deterrent to all public officials entrusted with the responsibility of providing public service and managing our national resources. GII has no doubt that, if enforcement and compliance of the various accountability laws and sanctions are effectively implemented, Ghana will be able to save most of the resources lost to corruption”, the release added.

CHRAJ in its final report, directed that, the former CEO of PPA is banned from holding public office for 10 years; declares his assets within three months and refunds GH¢5,697,530.00 (less GH¢86,000.00) to the state within six months.

But Adjenim Boateng Adjei, sued, asking the court to set aside CHRAJ’s findings against him.

The former CEO had wanted the court to issue an order of certiorari to quash CHRAJ’s ruling on grounds that it breached the rules of natural justice; however, the court presided over by Justice Elfreda Amy Dankyi ruled otherwise.

Mr Adjei argued that he was not given a fair hearing by CHRAJ in the case in which he was found guilty of conflict of interest in the award of government projects.

In the said report, CHRAJ found overwhelming evidence to show that Mr Adjei put himself in several positions where his personal interest in Talent Discovery Limited (TDL) and other companies conflicted with the performance of the functions of his office as CEO and Board Member of PPA, therefore, contravening article 284 of the 1992 Constitution.

Mr Adjei who served as the CEO of PPA between March 2017 and August 2019, was suspended from office and his appointment was subsequently terminated on October 30, 2021, by the President after an exposé conducted by journalist Manasseh Azure Awuni.

The former PPA CEO was caught in compromising positions in an investigative piece put together by freelance journalist, Manasseh Awuni Azure in 2019.

In the investigative piece, a company known as Talent Discovery Limited (TDL), owned by Mr. Adjei, was found to be getting government contracts through restricted tendering and selling those contracts to others for profit.

The President referred the corruption aspects of the case to the Office of the Special Prosecutor to probe, and that of conflict of interest was handed to CHRAJ.

CHRAJ had said the money accrued in Mr. Adjei accounts since assuming office in 2017 stood at GHS 14.8 million from his four Dollar and Euro accounts held at two banks.

According to CHRAJ, Mr. Adjei could not satisfactorily explain the source of the large volumes of excess wealth that passed through his bank accounts between March 2017 and August 2019.