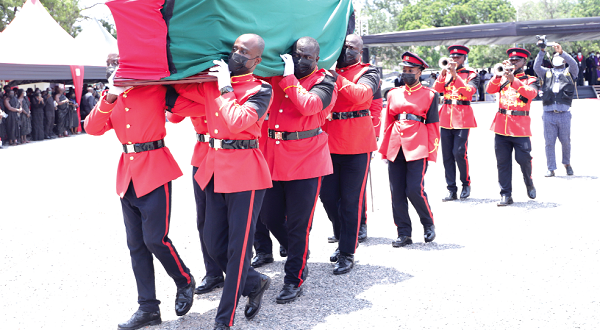 The remains of Justice Samuel Kofi Marful-Sau, a Justice of the Supreme Court, were laid to rest at the Osu Military Cemetery in Accra yesterday after a funeral at the State House.

Justice Marful-Sau who served as a judge at various levels of the bench for 19 years, including eight years at the Apex Court, died on August 10, this year.
Until his death, he was the fifth most senior judge of the 16-member Supreme Court.

Mourners expressed sorrow while others were in tears as they celebrated the life of the distinguished judge, lawyer and legal educator.

People started trooping onto the grounds of the State House from 6a.m. yesterday to file past the body of Justice Marful-Sau, after which the casket was carried by Military pallbearers to the Osu Military cemetery for interment.

Justices of the Supreme Court, other judges, lawyers, family members and people from the legal fraternity were also there to pay their respects to the late Justice Marful-Sau.

One thing that stood out in the tributes was the acknowledgment that Justice Marful-Sau was a man who dedicated himself to the service of the country, family and mankind.

The widow, Mrs Evangeline Marful-Sau, described him as a prayerful husband, “kind and a firm believer in education”.

His children said he was God fearing, good, as well as selfless and humble.

The Chief Justice also said Justice Marful-Sau’s commitment to work, competence, availability and willingness to help made him a great asset to the Judiciary and the country in general.

For his part, the A-G described Justice Marful-Sau as a top quality and remarkable judge who shaped the development of the law without fear or favour.

The Presiding Bishop of the Methodist Church of Ghana, the Most Rev. Dr Paul Boafo, who delivered the sermon, said: “Let us learn, especially the youth of today that it pays to work hard with values of integrity, good morals and respect.”

Justice Marful-Sau was born on February 3, 1957 at Assin Adubiase in the Central Region.

Justice Marful-Sau was appointed as a High Court judge in June 2002, and later elevated to the Court of Appeal in 2006.

He was nominated to the Supreme Court together with three other judges — Justices Agnes Dordzie, Professor Nii Ashie Kotey and Nene Amegatcher by President Akufo-Addo in 2018.

He was also the Director of the Judicial Training Institute, Chairperson of the Judiciary ICT Steering Committee and a lecturer in Civil Procedure at the Ghana School of Law.

He was survived by a wife and four children.