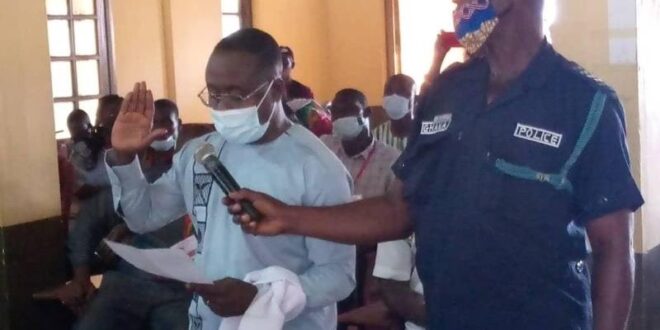 “Keta shall rise again” – Residents react to confirmation of MCE

The residents, who thronged the premises of the Municipal Assembly and waited patiently through the process till 1700 hours, said his confirmation meant the unpleasant happenings in the Assembly was over and a new dawn of development had been ushered in.

The exercise on Thursday saw Mr Gemegah polling 23 “YES” votes, representing 71.8 per cent, to become the MCE-elect for the area.

The thankful MCE, in a speech, promised that the Assembly, with all the resources and goodwill at its disposal, would strive to ensure that “Keta Municipality re-assumes its pride of place among the topmost municipalities in this country.”

Mr Gemega said the Assembly would urgently institute stringent innovative measures to generate revenue to complement funds from the Central Government and deal with falling education standards and insecurity, citing the recent armed robbery incidents in the Municipality.

“We will work hard to fix the challenges with premix fuel at our landing beaches and by the grace of God, by the time our tenure runs out, Keta Municipal will become a favourite tourist destination in the country,” he said.

“I urge all sons and daughters of the land, those in and outside Ghana, to put their shoulders to the mill in our ultimate pursuit of making Keta Municipal great again,” Mr Gemegah added.

Mr Dzudzorli Gakpey, the Member of Parliament (MP) for Keta, pledged his support to the MCE, who he described as “dynamic and difficult to control”.

His endorsement represented a new dawn and an end to “financial malfeasance and indiscriminate sharing of reclaimed lands. Keta shall rise again,” the MP said.