Breaking News
Home / NEWS / I bought US$151,000 Mercedes with excess cash after my US surgery – Kennedy Agyapong 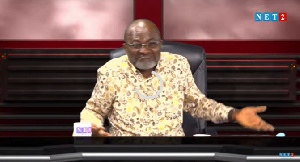 I bought US$151,000 Mercedes with excess cash after my US surgery – Kennedy Agyapong

He recounts buying a new car to celebrate a successful surgery. Assin Central Member of Parliament, Kennedy Agyapong, has disclosed one way he ‘celebrated’ his successful surgery to remove a brain tumour in the United States.

The media mogul and businessman revealed that he decided to replace one of his cars by splashing over US$150,000 on a new Mercedes S-Class.

Speaking on Oman FM earlier this week, he stated that the amount was from leftover funds earmarked for the surgery and recounted how the entire process of buying the said vehicle had taught him lessons on the importance of paying taxes.

“My hospital bills in America had leftover funds so I decided to treat myself by buying a Mercedes Benz S-class… as I speak to you, I have paid 80,000 dollars advance but I have yet to receive the car to pay the balance.

“What got me angry, I went there (to the dealership) and we arrived at 138,000 dollars plus tax of over 8.5% tax. The same tax you are refusing to pay here. Where in Ghana do people pay tax on car purchases?” he quizzed.

He continued: “After working the amount and tax, it came up to 151,000 dollars. They now told me to pay an extra 10,000 dollars because of scarcity and for their efforts to get me a car. I asked, ‘are you mad? Why did you not add it?’” he stressed.

According to him, in a bid to ‘dodge’ the extra sum he was being hit with, he went to his usual dealer and the same arrangement was in place only that they agreed to split the 10,000 and shoulder half.

“Range Rover and others were applying the same rule. I will beg Ghanaians, that Akufo-Addo and NPP have done well for Ghana but good living begets forgetfulness,” he stated in emphasizing the need to pay taxes, specifically the E-levy government is aiming to impose.
Agyapong during the last Parliamentary break went on holiday in the United States. Photos later emerged of a slimmed own Agyapong fueling rumours that he was suffering an acute ailment.

He spoke personally to the issue in an interview on an Assin Fosu radio station confirming that contrary to rumours that he suffered a stroke, he rather underwent surgery for a brain tumour, praising medics in Ghana who diagnosed the condition and recommended the surgery.