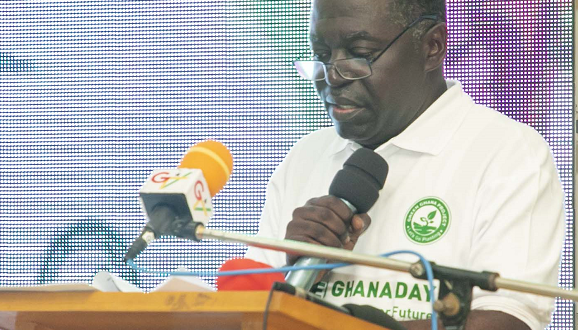 Over 22 million tree seedlings were distributed for planting on the Green Ghana Day (GGD) last Friday, the Forestry Commission (FC) has revealed.

Additionally, there were 55 different tree species among the over 22 million tree seedlings distributed, with 17 million being timber species, three million shade trees, while ornamentals and other species accounted for the remaining seedlings.

This came to light at a post-Green Ghana Day update provided by the Ministry of Lands and Natural Resources and the FC in Accra yesterday.

The Chief Executive Officer (CEO) of the FC, John Allotey, who provided the update, said 12 out of the 16 regions exceeded their national targets.

He said the only regions that fell below the target given them were the Northern, North-East and Oti.

“The Northern Region has a peculiar situation because the rainfall was poor, so we wanted to postpone the exercise there. Luckily, the rains came close to the date for planting and we had to go ahead and plant. That might have affected mobilisation for the tree-planting,” he said.

For his part, the Deputy Minister of Lands and Natural Resources in charge of Lands and Forestry, Benito Owusu-Bio, described the 2022 GGD as highly successful.

Mr Owusu-Bio, who doubles as the Chairman of the Green Ghana Committee, said GH¢6 million was released out of the GH¢9.6 million budgeted by the government for the exercise.

“Apart from this amount released by the government, Corporate Ghana and other institutions also contributed money for the exercise. We are still putting the figures together and will make the entire cost of the project known to all people,” he said.

He urged members of the public to attach more importance to the maintenance of the seedlings that had been planted to ensure that they survived and grew to maturity.

“Having gone through the GGD on June 10, what is paramount now is to ensure that we maintain what has been planted. We need to make conscious efforts to nurture the seedlings by watering them, protecting them from destruction, preventing fires, weeding around them until they grow to maturity.

“We are fortunate that we have good rains at the moment and we expect a higher survival rate this year than the 85 per cent survival rate last year,” he said.

Mr Owusu-Bio added that a monitoring team had been set up to assess the performance of the seedlings.

In his 2021 message on the State of the Nation, President Nana Addo Dankwa Akufo-Addo announced the Green Ghana initiative to mobilise Ghanaians for an aggressive nationwide tree-planting exercise.

Subsequently, Mr Jinapor, on March 23, 2021, launched the maiden greening project as part of activities to mark the International Day of Forests, which fell on March 21.

A 60-member Green Ghana Project Planning Committee was constituted, with Mr Owusu-Bio as its Chairperson.

A number of religious organisations, including the Roman Catholic Church, the Methodist Church Ghana, the Church of Pentecost and the Presbyterian Church of Ghana, mobilised their members to plant one million tree seedlings each.

Also, the Chief Imam encouraged Muslims to take part in the tree-planting project by planting trees around mosques across the country.

Five months after planting the trees, independent investigations by the National Investigations Bureau (NIB) revealed that 85 per cent of the tree seedlings planted survived.

Speaking at the Meet-the-Press series in Accra on December 16, last year, Mr Owusu-Bio disclosed that the report presented by the NIB showed that 7,193,424 seedlings were distributed to the 16 regions, out of which 6,603,298 were verified as having been planted, with 85 per cent of them surviving.

He said the findings of the NIB confirmed the results of the field work that the ministry and the FC carried out on the survival rate of the seedlings.

Before the NIB report was published, the Ministry of Lands and Natural Resources had indicated that its initial assessment of the performance of the tree seedlings planted in forest zones had shown that about 99 per cent of them had survived.

Subsequently, the ministry rolled out an initiative to take stock of the planted seedlings.

Dubbed: ‘Visit your tree’, the initiative called on all the high-profile personalities who had taken part in and planted trees on the GGD to visit their trees to ascertain how they were faring.

Among the personalities were President Akufo-Addo, Vice-President Mahamudu Bawumia, the Speaker of Parliament, Alban S.K. Bagbin; the Chief Justice, Justice Kwasi Anin Yeboah, and all the heads of religious bodies.

Following the success of the maiden GGD, the target of tree seedlings to be planted was raised from five million last year to 20 million this year.