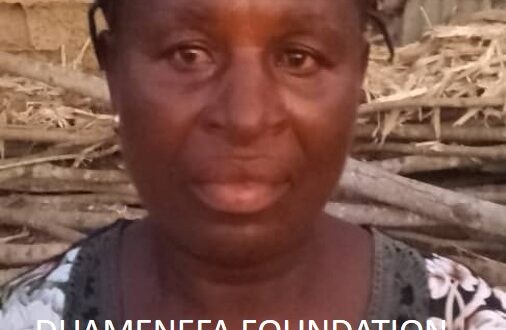 FIGHTING OVER DECEASED PROPERTY FOR THE PAST 25 YEARS STOPPED

Twenty-five years after the demise of Kwami Ametepee, the surviving widow, Madam Ama Gadasu and her three children between the ages of 32 and 26 were thrown into a state of confusion over their late bread winner’s properties.

When the senior daughter of the deceased began to suffer from mental derailment, it was considered a medical challenge hence she was moved to Pantang mental hospital in Accra, but not too long after her predicament, the immediate junior sister followed suit and sequentially the three began to behave abnormally.

Their mental challenge was later traced to the quarrel over their late father’s properties which resulted in allegations of spiritual manipulation and orchestration by the parties involved.

Meanwhile, Akpla Korbla Ametepee and Bella Ametepee, their uncles, took over their father’s properties, made up of 13 different large expanse of farmlands, 3 large creeks meant for fish farming, fishing boats and fishing nets belonging to their deceased senior brother.

The family head and the chiefs of Atiavi Atime, in the Keta Municipality of the Volta Region of Ghana tried their possible best to resolve this impasse for the past 25 years, but could not succeed.

The widow and the two junior brothers of the deceased kept dragging themselves from one voodoo shrine to another.

Whereas the widow summoned Bella and Korbla for the gods to be killed. Korbla and Bella were also bent on possessing and making use of the properties in their disposal for the past 25 years, hence they have also gone to seek protection and power from other voodoo shrines.

Within the period, the three children were suffering from mental derailment, ranging from the senior to the junior daughter.

In the month of June 2021, the widow petitioned the Duamenefa Foundation of Fafaa 100. 3 FM Dzodze in the Ketu North Municipality of the Volta Region for investigation and intervention

The Duamenefa Foundation of Fafaa FM, dispatched its undercover journalist to unravel the mysteries behind the aforementioned allegations.

The investigation and broadcast of the findings lasted for six months.

Issues of properties of the deceased as mentioned above were truly in possession of the two junior brothers.

The two junior brothers of the deceased were discovered to be suffering from allegations of spiritual attack which rendered Bella Ametepee incapacitated.

They have attributed their plight to invocations of the wrath of the gods against their lives by the widow who was also bent to dispossess them of her husband’s properties at all costs.

Upon detailed interrogations, the widow admitted she consulted a fetish priest called Togbivi Bengali of Avenorpeme who gave access to the gods, but failed to exorcise the gods as requested by the widow, hence the three children and their uncles have allegedly become victims of spiritual attack.

The Duamenefa Foundation of Fafaa FM upon its findings called on the relevant stakeholders such as; the National Commission for Civic Education, (NCCE) Keta Municipality, the Ghana Police Service and the Traditional Rulers of Atiavi Atime to a community traditional arbitration for reconciliation of the hitherto antagonistic spiritual and diabolical conflicts within the Ametepee family for the past 25 years.

The intervention yielded positive results. Korbla Akpla and Bella Ametepee willingly surrendered their deceased senior brother’s properties back to the widow and her children. However, the distribution of the properties was referred to the NCCE directorate for interpretation of PNDC law 111. This is scheduled to be take place on the 18th day of February 2022.

The fetish priest, Togbivi Bengali is to be re- summoned through the Divisional Chief of Avenorpeme to appear on the 18th February to exorcise his gods to free the family from alleged spiritual entanglement.

The three daughters were taken through Christian deliverance Intervention prayers and they are responding positively to prayers, as one of them was interviewed on air and she was able to speak and explained herself in details, unlike before.

The NCCE Directorate of Keta Municipality through its lead officer in person of Mr. Raymond Carl Siamey, commended the intervention efforts of the Duamenefa Foundation of Fafaa FM for its methodology of collaborative Journalism towards peace and reconciliation of hitherto antagonistic spiritual and diabolical conflicts in line with the customary laws of Ghana.

The Executive President of the Duamenefa Foundation and CEO of Fafaa FM, Mr. Ketaman Emmanuel Evortepe, also used the occasion to thank the NCCE and other relevant stakeholders for their collective collaboration to achieve the successful results.

The Duamenefa Foundation of Fafaa FM is a Non-Profit organization with over 23,000 registered and certified volunteers scattered across most communities in the Volta Region of Ghana.

Its volunteers are mandated to promote peaceful coexistence of people in their various communities.