Breaking News
Home / NEWS / ‘Dampare will be confirmed as IGP, he has vindicated me’ – Nana Addo 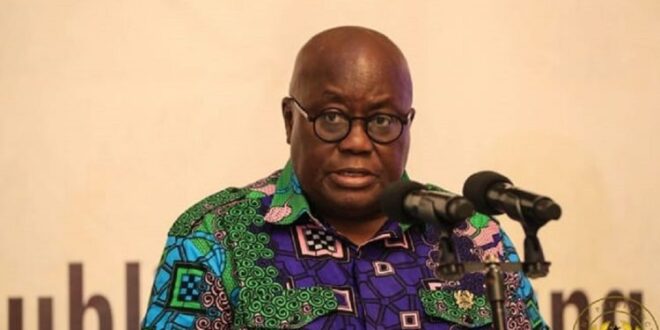 ‘Dampare will be confirmed as IGP, he has vindicated me’ – Nana Addo

“I cannot end without reiterating the support of government and I for the recent actions taken by the Acting IGP George Akuffo Dampare which are eliciting strong backing from the population. He has so far vindicated my decision to repose trust in him to hold this high office.”

“I am confident, once the necessary processes are completed, which I’m sure will be soon; he will become our nation’s 23rd Inspector General of Police,” he said

The Police Service has introduced a number of reforms since the appointment of COP Dampare.

Just recently, the Police Service said it was introducing some security measures to curb robberies in the country.

The Service has also arrested some influential persons flouting the laws since COP Dampare started acting in his role.

A few weeks ago, the Service interdicted four police officers for assaulting some residents in Tamale.

The Service for the first time in recent years apologized to media personnel when some of them were heckled at the precincts of the court when popular preacher, Ernest Owusu Bempah was arrested and sent to court.

Police visibility and communication with the public have tremendously improved under his tenure so far.

At the same event, President Akufo-Addo gave assurances that the Ghana Police Service and other security agencies will deal decisively with the increasing spate of armed robberies and other violent crimes in the country.

The President said he appreciates the concerns of Ghanaians about the security situation, but added that he’s certain the country’s security agencies will quickly address it.

“I’m aware the recent incidents of violent crimes in some parts of the country have generated safety and security concerns from several sections of the populace. I want to assure Ghanaians that the Police Service and indeed all the other security services are determined to deal decisively with the threats posed by dangerous criminals and criminal syndicates,” he said.