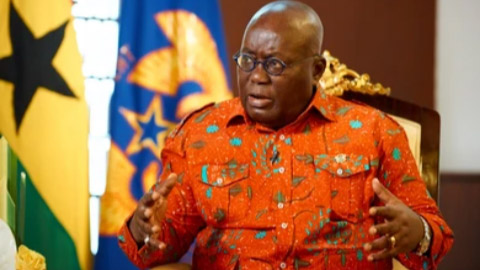 President Nana Addo Dankwa Akufo-Addo has warned that he will go tough on persons attempting to topple the government and destabilize the country’s democratic gains.

He says Ghana’s democracy and that of the world cannot be left to persons who want to “gratify their personal ambition, ambitions which show little or no respect for the capacity of the Ghanaian people”

Speaking at the 65th Independence Day parade in Cape Coast, the President assured that his administration is committed to strengthening peace and stability to fulfil the purpose for which the country transitioned to constitutional rule.

“The great majority of us who are committed to democratic values and institutions will continue to resist the claims of these adventurers and deploy all legitimate means in our democracy to maintain our free open system of governance which has respect for human rights, the rule of law and the principles of democratic accountability.”

Some analysts have warned that the worsening economic situation in the country may make it vulnerable to a forceful takeover of government.

Recently, the Dean of the University of Ghana School of Law, Prof. Raymond Atuguba, expressed his fear that Ghana may have a coup on its hands if urgent action is not taken by the state.

“We do not want a coup in this country. Yet I fear that if we do not act quickly, we may have one in our hands very soon,” he said while delivering a lecture in Accra.

There are two different trials ongoing against persons charged with treason-related offences.

But Nana Akufo-Addo maintains that years of military coups and takeovers have brought little or no progress to the African continent and must not be entertained.

“Let us guard jealously the peace and stability we are enjoying. There are some restless spirits amongst us who, seeking to exploit the current difficulties confronting the nation, claim to have lost confidence in our democratic system.”

“Either the absence of faith in the prospect of a democratic alternative to the current government or their impatience to wield executive authority are the factors driving their appetite for the shortcut of military intervention. Whatever be the case, they seem ready to jeopardize the hard-won reputation of our country as a beacon of democracy and stability in Africa and indeed, in the world, in order to gratify their personal ambition, ambitions which show little or no respect for the capacity of the Ghanaian people to change when necessary their government peacefully through the ballot box, something we have done on three separate occasions in the 29-year life of the fourth republic.”