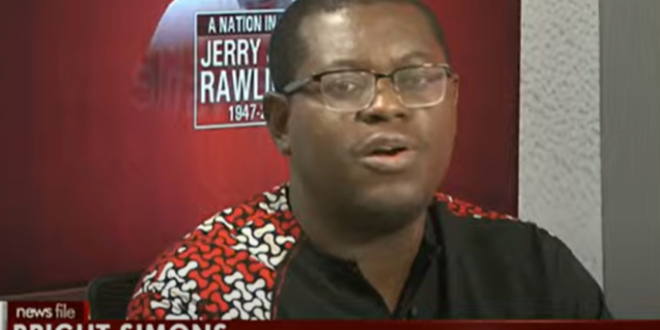 Vice President of the IMANI Centre for Policy and Education, Bright Simons has waded into the standoff between the Attorney General, Godfred Dame, and Ranking Member on the Finance Committee, Cassiel Ato Forson over the botched ambulance procurement project.

The Attorney-General’s office has filed criminal charges including causing financial loss to the state against former Deputy Finance Minister, Dr. Cassiel Ato Forson and two others over the procurement of some 200 ambulances at the tune of £2,370,000.

However, it was discovered later that the ambulances were not fit for purpose and were thus abandoned.

According to Bright Simons, the decision to prosecute the former Deputy Finance Minister is “like prosecuting the MD of SIC for insuring a car later found to have been used in a robbery.”

He has called on the Attorney General to “go after the real dealmakers.”

His comment comes on the back of Cassiel Ato Forson’s explanations that he had only issued letters of credit for the procurement and had not authorised the purchase of the ambulances, as is being suggested.

He has described the charges as frivolous, and an attempt to silence him and the Minority due to their stance on the E-Levy bill.

“It should be noted that I, Cassiel Ato Forson did not authorize payment for the said £2,370,000. But my only job in the entire transaction was to request the issuance of letters of credit on the authority of the Minister responsible for Finance at the time,” he said.

He explained that a Letter of Credit was only a guarantee “that a buyer’s payment to a seller will be received on time and for the correct amount and in the event that the buyer is unable to make a payment on the purchase, the bank will be required to recover the full or remaining amount of the purchase.”

“Letters of credit are not payment. I did not authorize payment,” he stressed.

He has, therefore, thrown a challenge to the government to provide evidence proving that he indeed authorized payment for the purchase of the said ambulances.

“Unless somebody tells me they don’t understand the meaning of Letters of Credit. It is just a guarantee and not a payment by itself. In fact, in the Letter of Credit that was issued, someone had to authorize that payment and certainly not me. At the right time we’ll make sure that document is made available,” he said.