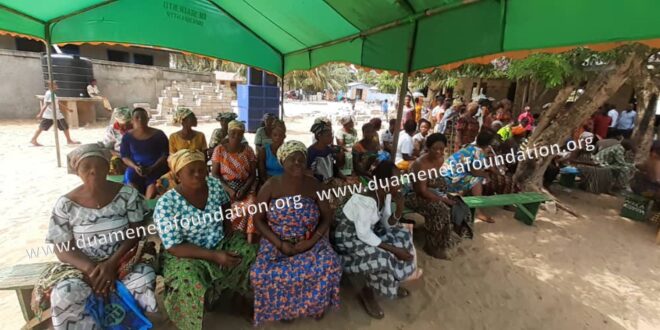 Ativuta community located in the Ketu South Municipality of the Volta Region has celebrated their Christmas in a grand style through community fun games initiated by the Duamenefa Foundation of Fafaa 100. 3 FM Dzodze.

It is a day to remember due to the pomp and pageantry of fun games such as sack racing, storytelling, ampey, Cipar, Ludo, and local rhythms of Tsiaƒulegede, among other local games.

Participants of all age categories greeted the celebration with joy of laughter and reconciliation among people who have stepped on each other within the year under review.

Present at the fun games were the traditional rulers from Nogokpo and Ativuta, members of the Duamenefa Foundation and spectators in their thousands of numbers.

The objective of the fun games is to promote peaceful co-existence of people in their various communities.

Several prizes were freely given to over 45 participants by the Duamenefa Foundation of Fafaa FM.

The International Director of Operations for Duamenefa Foundation, Rev. Diane Westcott charged the recipients to use the equipment for its desire purpose and not to be sold or loaned to a third party. They received the sewing machines with tears of joy, singing and glorifying God for the unexpected opportunity with a pledge to abide by the terms and conditions prescribed above.

The chiefs and people of Ativuta – Nogokpo expressed gratitude to Duamenefa Foundation and Treasures of His Eyes for its intervention and kind gestures which they described as a means of putting food on their table.

During this year of  2021, under the same initiative, Treasures Of His Eyes, through the Duamenefa Foundation has donated Sewing Machines to people in different communities of the Volta Region; such as  Madam Benonia Mensah and Madam Lena Ewudor at Blekusu, Madam Miranda Kushiator at Aflao, Madam Xedzro Happy, a physically challenged woman at Mafi Tsati and water pumping machine to Mr. Ahiave Ebenezer at Ave-Atiglime , this brought together over 30 single parents benefactors who were empowered through the initiative.

According to the chiefs and people of Ativuta – Nogokpo, the Duamenefa Foundation of Fafaa FM has succeeded in promoting peaceful co-existence through the various events and this is the first in the history of the community where an NGO has embarked on such remarkable peace building through fun games and its associated free gifts to participants along with single parents’ empowerment initiative to some of them. It is a Christmas to remember.