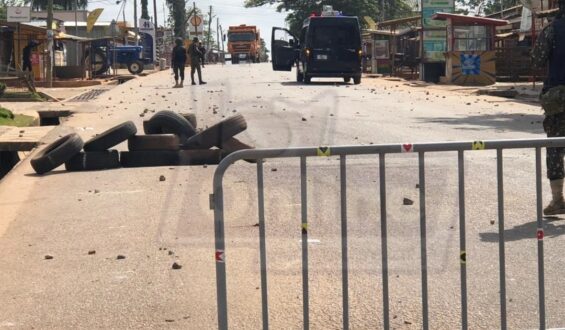 An operation by the Police to keep sanity in Aktasi has resulted in the death of three persons in the Akatsi South Municipality.

A police riot van is reported to have rammed into three youths on a motorcycle leading to the death of one of them. This was during a hot chase by the Police, after suspecting them to be culprits of a recent robbery.

Hamza Adamu was also alleged to have been killed by live bullets from police guns during a clash between the youth and the police on Sunday.

The youth were said to have gone rampaging in protest of the alleged involvement of the Police in the death of the young man on the previous day.

Etornam Avulekpe, who was buried last month, is alleged to have also died from Police brutality.

According to a Facebook user, Selorm Ameza, the police on Saturday, April 9, 2022, gave the 3 guys a hot chase who they believed were linked to a recent robbery incident.

The guys thinking they were being chased for an overloading offence sped off.

According to the Facebook user, “the Police rammed into the three guys on a motorcycle with their Riot Control Van. They actually smashed the guys on the motorbike with their Van onto the guard reels used to barricade the side of the road.”

When the Police were contacted, they confirmed the incident indicating “men are on the ground to maintain order. Details will be communicated to you in due time”.