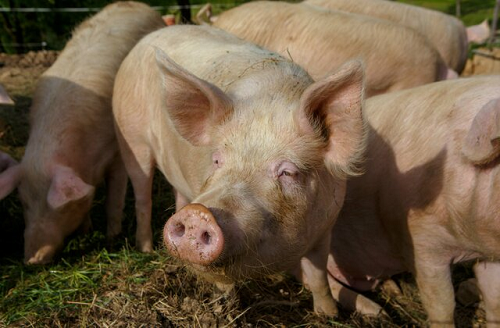 More than 200 pigs in seven farms at Jankufa, a farming community in the Jaman North District of the Bono Region, have been destroyed after they tested positive for the African Swine Fever (ASF) virus.

Also known as swine fever, the virus is a highly contagious hemorrhagic disease that affects domestic and wild pigs.

The Bono Regional Veterinary Service Department of the Ministry of Food and Agriculture has buried the contaminated pigs to prevent further spread of the virus.

The virus was detected last Tuesday after farmers in the area complained of several deaths of their animals, which necessitated the testing.

The Bono Regional Director of the Veterinary Service, Dr Donald Joachim Darko, who confirmed the incident to the Daily Graphic, said results of samples of the pigs were confirmed upon tests in Accra last Friday.

Dr Darko explained that the ASF disease had no cure and could only affect domestic and bush pigs, saying “currently, there is no approved vaccine for ASF”.

Dr Darko said the ultimate way was to slaughter all the animals within eight kilometres from Jankufa, but “we cannot do that because of compensation issues. However, if the government says it can compensate the farmers, we will kill them to avoid further spread”.

He said the Veterinary Service Department had, meanwhile, put restrictions on the movement of pigs in the area, and advised farmers to ensure that they put measures in place to restrict their animals from movement to help control the spread of the virus.

He explained that the severe type of the virus could spread faster, saying “it can cause death of animals within two to three days after infection. It can spread like a wild fire, if care is not taken”.

He said pigs with moderate cases could live with the disease for weeks without signs and symptoms of it, making it difficult to detect its existence in the farms.

Dr Darko mentioned the lack of appetite, red skin, (bloody) diarrhoea, vomiting, bleeding, cyanosis (blue skin) and necrosis of parts of the skin (blackening) as some of the signs of the virus.

He explained that the cases recorded at Jankufa were the severe type of the disease that caused the animals to die faster within few days of infection.

Dr Darko said the Veterinary Service Department had put restriction on the movement of the pigs in the area and advised farmers to ensure that they put measures in place to restrict their animals from movement to help control the spread of the virus.

He cautioned pig farmers to desist from transporting any product from the affected farms to different farms.

Dr Darko explained that the virus could not survive in temperatures of more than 70 degrees celsius and could also not affect human beings, but should be managed well to contain its spread.

He, however, cautioned against the consumption of dead animals.