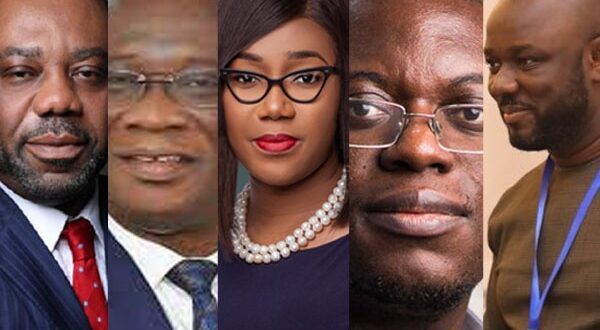 A multi-billion-dollar scandal is brewing around the Akufo-Addo administration with the Ghana National Petroleum Corporation (GNPC) presenting documents to Parliament for a loan of US$1.6 billion to undertake oil exploration.

Suspiciously, the GNPC is seeking to sink in some US$1.3 billion of that money to buy back a 37percent stake in the DeepWater Tano/Cape Three Points asset operated by Aker Energy AS and 70percent stake of the South Deep Water Tano (SDWT) field which GNPC previously had over 43percent stake in, but was dubiously reduced to 18percent, following a convoluted renegotiation of that contract with Finance Minister Ken Ofori-Atta, playing a suspiciously major role in it.

The Herald is informed that the cost of buying back the wells cannot be US$ 1.6 billion as GNPC is telling the public, as there is no expert valuation or audits on the blocks to determine the veracity of claims that AGM Petroleum/Aker Energy Petroleum had made some massive investments into them.

Interestingly, it was revealed that the AGM Petroleum/Aker Energy Petroleum heavily linked to elements and family members of President Akufo-Addo, had gotten the wells valued at around US$800 million, leaving experts in total shock as to how GNPC’s figures got to US$ 1.6 billion.

Insiders insist that GNPC, had not done any form of valuation, but only inflated the prices at which the sellers intended to sell the blocks.

Indeed, The Herald is picking up information that the Petroleum Commission headed by Egbert Faibille Jnr has in its books an amount of US$400 million as the value on the blocks and not GNPC’s US$ 1.6 billion or AGM Petroleum/Aker Energy Petroleum’s US$800 million.

This paper’s information is that last Friday, the management of the GNPC got one Rajeev Madhavan of Lambert Energy Advisory churning out some figures in Zoom meeting with the some Civil Society Operatives which he said were estimated values of the some numbers given him by the GNPC to make projection for the corporation.

These numbers were handed over to him long after the GNPC through the Energy Minister, Matthew Opoku Prempeh, sent the US1.6 billion suspicious loan agreement to Parliament for its consideration and approval.

Rajeed Madhavan of Lambert Energy Advisory could not persuade the likes of Bright Simons of IMANI Ghana, Ben Boakye of Africa Centre for Energy Policy, Kwame Jantuah, Franklin Cudjoe, Theo Acheampong, Alex Mould, Dr. Steve Manteaw and several others when on the Zoom meeting in a postmortem approach by the GNPC to justify the US$1.65 billion price.

At the end of the meeting, it was clear that GNPC’s resource person; Rajeev Madhavan of Lambert Energy Advisory, could not convince the CSO, many of whom raised critical questions forcing one Joe Dadzie of the GNPC to indicate another meeting at yet to be indicated date.

Kadijah Amoah, as CEO of Aker Energy Ghana Limited, was also on the platform but the former Jubilee House staff in the Office of the Vice-President, did not speak and tried to indicate how much value Aker acquired has placed on the blocks, which used to be for GNPC until recently.

Meanwhile, The Herald has picked up the names of some journalists, Members of Parliament and leading figures in the CSO to have them through financial inducements to endorse the deal.

Around 2019, the Akufo Addo administration caused a serious uproar among industry players and civil society groups by pushing Parliament to renegotiate a 2013 Petroleum agreement between Ghana and AGM Petroleum/Aker Energy Petroleum resulting in the decline of GNPC’s stake 43 percent to 18 percent in the SDWT block which it is seeking the staggering loan from Parliament to buy back stakes it relinquished recently.

When GNPC’s stake through several opaque boardroom dealings was dropped, suddenly, a new local content partner Quad Energy which was nowhere involved in the oil block was sprung into play reportedly by Finance Minister Ken Ofori-Atta.

Quad Energy is owned by Joseph Babatunde Ampah and his Uncle David Adomako, who media reports had alleged was smuggled onto the AKER board by Mr. Ofori-Atta.

As for Mr Babatunde Ampah, he is a close family friend of President Akufo-Addo and his cousin Finance Minister.

After analyzing the proposals by GNPC and Government, we are clear in our minds that the transactions, if approved, will short-change Ghana. Therefore, we request Parliament to intervene, given that the deal has gone through all the relevant branches of the Executive, ostensibly glossing over important threats of the transaction to the country’s fiscal situation.

The Alliance of Civil Society Organisations (CSOs) working on Extractives, Anti-Corruption and Good Governance raised serious red flags through a press statement that the loan being surreptitiously being pushed through the Ghanaian parliament amounts to short-changing Ghanaian taxpayers funds and unduly burdening the country with extra debt.

“After analysing the proposals by GNPC and Government, we are clear in our minds that the transactions, if approved, will short-change Ghana. Therefore, we request Parliament to intervene, given that the deal has gone through all the relevant branches of the Executive1, ostensibly glossing over important threats of the transaction to the country’s fiscal situation,” the CSO alliance warned.

According to the group in the statement copied to all relevant stakeholders in the upstream petroleum industry, the asking price of AKER to relinquish almost all its stake in the two oil blocks amounts to a possible scam.

“Aker claims it has invested about US$800 million so far on the blocks in a document submitted to Parliament. While GNPC claims it has verified the expenditures, it still appears inflated if juxtaposed against the amount of work done by Aker and the value of its acquisition three years ago,” the statement from the CSO’s noted.

In their analysis of why the amount being sought by the GNPC was unnecessarily inflated, the group explains that Aker Acquired Hess’s interest in the DWT/CTP for US$100m in 2018. Before selling its interest to Aker, Hess had appraised the field with estimated recoverable oil of 450 million barrels. In total, Hess drilled 12 wells (seven exploratory wells and five appraisal wells). With that amount of work done, the highest valuation Hess got was about US$400 million in 2016.

Aker claims it has spent about US$420 million on five wells drilled on the two blocks and documents Economic Management Team (EMT) shows that the US$420 million relates only to three wells on DWT/CTP.

The CSOs think Aker had all along unduly inflated its operational cost to the Akufo Addo administration in what could be a complex conspiracy to loot, given how closely tied the Finance Minister is tied to Aker Energy.

“GNPC claims that money was used for “certain activities essential for establishing resources in the blocks”. This is overly ambiguous and cannot be accepted as a cost with this kind of description which questions the distinction between that activity and data acquisition and studies done as part of exploration and appraisal,” the extractive sector CSOs queried.

Aker Energy made a comeback to Ghana in 2017 through two acquisitions; South Deep Water Tano (SDWT) block, which Aker exited after its agreement with Ghana was abrogated in 2009.

Africawatch’s investigation revealed that 69-year-old Norwegian businessman Kristian Arvid Haug who incidentally dubiously sold his home to Ghana to be used as Ghana’s Embassy in Oslo, is a close family friend of President Akufo Addo, and that Huag had been shuttling between Accra and Oslo, through London with some of the President’s relatives to meet with Norwegian oil companies. One such company, Africawatch hints, is Aker Energy ASA or Norway owned by Norwegian billionaire Kjell Inge Rokke.

The Magazine claims that it was through this close family dealing that resulted in GNPC’s stake being reduced in the two oil blocs currently doing a comeback in GNPC’s priority list.