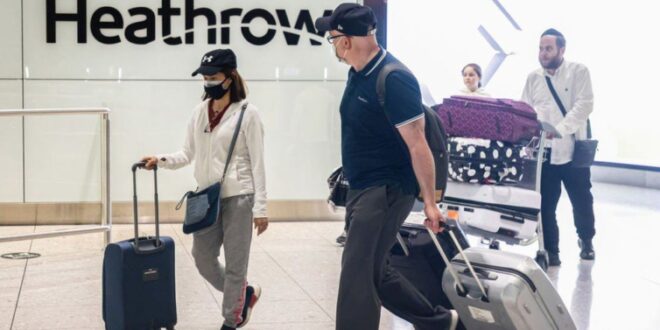 Heathrow Airport has told airlines to stop selling summer tickets, as the UK’s biggest airport struggles to cope with the rebound in air travel.

The airport is limiting the number of passengers who can depart each day over the peak summer months to 100,000, 4,000 fewer than currently scheduled.

The cap on passenger numbers will be in place from now until 11 September.

Thousands of UK travellers have been affected by disruption in recent weeks, including last-minute cancellations.

Airports and airlines, which cut jobs during Covid lockdowns, have struggled to recruit staff as demand for holidays has returned. The UK is about to enter the key summer holiday season as schools begin to break up.

Consumer group Which? urged Heathrow to clarify which flights would be cancelled as a result of the latest announcement.

“While this cap may ease the unacceptable chaos passengers are facing at the UK’s biggest airport, thousands of people will now be worrying about whether their flight or holiday plans are about to fall apart,” said Guy Hobbs, acting editor of Which? Travel.

“Heathrow must work with airlines to quickly provide clarity on which flights are being cut, and airlines need to be upfront with those passengers affected about their right to be rebooked at the earliest opportunity, including on services from other airlines.”

A Heathrow spokesperson said it would take “a couple of days” for airlines to work with the scheduling company, Airport Coordination Limited, to decide what changes would be needed.

Ministers told carriers to review their plans after chaos in May, blamed on a shortage of airline and airport staff.

In addition, a temporary government “amnesty” to the rules on airport slots was put in place, allowing airlines to change their summer schedules without facing a potential penalty.

But despite this, Heathrow said airlines were still planning to operate flights carrying more daily passengers than could be processed in an acceptable manner.

“Over the past few weeks, as departing passenger numbers have regularly exceeded 100,000 a day, we have started to see periods when service drops to a level that is not acceptable: long queue times, delays for passengers requiring assistance, bags not travelling with passengers or arriving late, low punctuality and last-minute cancellations,” said Heathrow boss John Holland-Kaye.

“Our assessment is that the maximum number of daily departing passengers that airlines, airline ground handlers and the airport can collectively serve over the summer is no more than 100,000.

“The latest forecasts indicate that even despite the amnesty, daily departing seats over the summer will average 104,000 – giving a daily excess of 4,000 seats. On average only about 1,500 of these 4,000 daily seats have currently been sold to passengers, and so we are asking our airline partners to stop selling summer tickets to limit the impact on passengers.”

But Willie Walsh, director general of the International Air Transport Association and a former head of British Airways (BA), was sharply critical of Heathrow’s move.

“To tell airlines to stop selling – what a ridiculous thing for an airport to say to an airline,” Mr Walsh told Reuters.

He added: “Heathrow are trying to maximise the profitability that they get from the airport at the expense of airlines.”