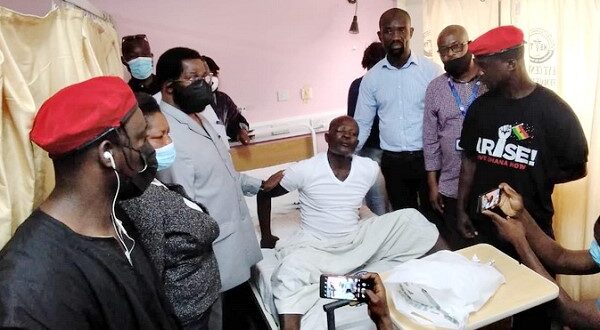 Leaders of Arise-Ghana, the nationalist group which recently led a two-day demonstration over a number of what they described as malaise confronting Ghanaians, including economic hardships, say they have instructed their lawyers to institute legal action against the Ghana Police Service.

Also to be joined in the suit is the government, for the payment of appropriate and adequate compensation to all injured persons during their recent protest against the government over prevailing  hardships in the country.

At a press conference in Accra on Tuesday, July 12, 2022, Mr. Bernard Mornah, a leading member of Arise-Ghana said leaders of the group will not rest until all injured persons get justice.

It will be recalled that 12 police officers and dozens of protestors were reported to have been injured on the first day of Arise-Ghana’s protests on June 28, 2022, after the protestors and the police clashed over the routes to be used for the protest march, resulting in the trading of stones, teargas and hot water.

Twenty-nine demonstrators were also arrested for alleged violent attacks on the Police and the public as well as destroying public property.

Arise-Ghana stated the two-day demonstration in Accra was to protest fuel price hikes, the imposition of the tax on electronic transactions, as well as the worsening economic conditions in the country.

Mr. Mornah while addressing the media said members of the group were attacked by the police for no reason, saying “Friends from the media, as you may be aware, several AriseGhana protestors were attacked and brutalised by the Dampare-led Police Service for no justifiable cause on the first day of our historic demonstration held on 28th June, 2022.”

For him, members of the group were brutalised by the police “after the Police had tried without success to frustrate” the demonstration against the government over rising cost of living in the country.

“The Police lawlessly went on to disregard a Notice of Appeal and an Application for Stay of Execution we had filed in respect of that matter all in an effort to frustrate the exercise of our constitutionally guaranteed rights to demonstrate,” he noted.

He added, “As a result of the unprofessional and lawless conduct of the Dampare-led Police, many innocent Ghanaians were injured,” adding that “ninety-three (93) peaceful protesters sustained varying forms of injuries ranging from bone fractures, rubber bullet wounds among others.”

Below is the statement

PRESS CONFERENCE BY ARISEGHANA ON THE AFTERMATH OF THE HISTORIC FORTY-EIGHT HOUR ‘KROM AYE SHI’ DEMONSTRATION AND THE WAY FORWARD.
Tuesday, 12th July, 2022

Good morning distinguished ladies and gentlemen of the press. On behalf of AriseGhana, I wish to welcome you to the International Press Center for today’s press encounter. We thank you for always availing yourselves whenever we call on you.

We have called this press conference today to address a myriad of issues following our two-day historic “KromAyeShe” demonstration which took place in Accra on Tuesday the 28th of June and Wednesday the 29th of June, 2022. Today, we will be addressing you on;

1. fallouts from the barbaric brutalities meted out to innocent AriseGhana protestors on the 28th of June, 2022 by the Dampare-led Police;

2. the arrest and detention of innocent AriseGhana protesters by the Dampare-led Ghana Police Service and;

3. The way forward for AriseGhana.

Friends from the media, as you may be aware, several AriseGhana protestors were attacked and brutalized by the Dampare-led Police service for no justifiable cause on the first day of our historic demonstration held on 28th June, 2022. This was after the Police had tried without success to frustrate the historic demonstration which was a protest against the excruciating hardships Ghanaians are reeling under occasioned by economic mismanagement, persistent fuel price hikes, the alarming depreciation of the Ghana cedi, the obnoxious E-levy and COVID levy, unprecedented corruption and the looting of critical state assets by the NPP/Akufo-Addo/Bawumia government.

You may recall that AriseGhana had given the Police a 20-day notice and had reached an agreement with them upon series of engagements on the date, time, duration and route for the demonstration. But in a show of bad faith and in a bid to frustrate the historic demonstration, the Dampare-led Police Service run to the High Court at the eleventh hour for a restraining order against AriseGhana. The Police lawlessly went on to disregard a Notice of Appeal and an Application for Stay of Execution we had filed in respect of that matter all in an effort to frustrate the exercise of our constitutionally guaranteed rights to demonstrate.

Indeed, 28th June, 2022 was a day of shame for Ghana. The sad events of that day will forever remain a blot on our democratic credentials as a country. Ironically, these brutalities on innocent citizens were done with the tacit approval of President Nana Addo Danquah Akufo-Addo, who has led several demonstrations in this country in time past and was once touted as a human rights activist.

As a result of the unprofessional and lawless conduct of the Dampare-led Police, many innocent Ghanaians were injured. From information received so far, ninety-three (93) peaceful protesters sustained varying forms of injuries ranging from bone fractures, rubber bullet wounds among others. The leadership of AriseGhana has since visited some of the victims and has borne the cost of their treatment.

Ladies and gentlemen, what is most painful is the case of Comrade Nii Ayi, one of the victims of the reckless Police brutalities of 28th June 2022 who was hit by a rubber bullet in his right eye and has been declared blind in that eye by doctors at the Eye Center of the Korle Bu Teaching Hospital. AriseGhana is saddened and outraged that an unarmed citizen who decided to exercise his inalienable and constitutionally guaranteed rights by joining a peaceful demonstration against hardships, economic mismanagement and corruption will be subjected to such barbaric attacks resulting in the permanent impairment of his sight. We empathize with our brother Nii Ayi and will continue to explore all available medical remedies both locally and intentionally for his recovery. We shall also continue to visit other victims and support their treatments until they fully recover.

THE UNWARRANTED ARREST, DETENTION AND PERSECUTION OF ARISEGHANA PROTESTERS.

Friends from the media, in an effort to divert attention from their lawless and reckless conduct, the Dampare-led Police indiscriminately arrested thirty one (31) innocent protesters on the first day of the historic “KromAyeShe” demonstration.

The arrested protesters whose only crime was their decision to demand better living conditions and accountability from the current duty bearers of our country through a demonstration were detained, starved of food and denied access to their families and lawyers for 48 hours by the Dampare-led Police service. The callous decision by the Police to starve the detained protesters resulted in one of them developing health complications that required urgent medical treatment. Fortunately, the leadership of AriseGhana was able to secure bail and the release of all the detained protesters on 30th June, 2020.

The Dampare-led Police under the direction of the tyrannical Akufo-Addo/Bawumia government have subsequently arraigned the released protesters before court to persecute them for no justifiable cause while the real culprits and agent provocateurs who were planted among us by the Police to orchestrate the unfortunate clashes of June 28 have been left off the hook. Our checks show that one of the agent provocateurs who threw the first stone at his colleagues in uniform and was arrested by the protestors and handed over to the Ghana Police Service has been freed without any questions from the Police.

We are also aware of the edict of President Akufo-Addo to the Ghana Police service for innocent AriseGhana protesters to be harassed and punished so as to intimidate and deter Ghanaians from joining future demonstrations by AriseGhana. We remain unfazed and unperturbed by these communist inferior tactics of the despotic Akufo-Addo/Bawumia government.

AriseGhana has arranged legal representation for all protesters who are facing this harassment and persecution and shall stand by them every step of the way until their innocence is vindicated. We will not be cowered into silence.

THE WAY FORWARD
Ladies and Gentlemen, as we have already indicated, AriseGhana will continue to follow up on all victims of the brutalities of the Dampare-led Police service until their full recovery. We have instructed our lawyers to institute legal action against the Ghana Police Service and the Republic for the payment of appropriate and adequate compensation to all injured persons. We shall not rest until all injured persons get justice.

Also, AriseGhana will continue to provide the necessary legal support for all the innocent protestors who were arrested and are currently being persecuted by the tyrannical Akufo-Addo/Bawumia government until their innocence is vindicated.

In keeping with our objective of championing the interest and welfare of Ghanaians, AriseGhana will be holding a mammoth demonstration on the 22nd of August, 2022 in Kumasi, the capital of the Ashanti Region. Through this demonstration which will be the second of the series of demonstrations we intend to hold across the length and breadth of the country, Ghanaians from all walks of life will congregate in the garden city to protest against excruciating economic hardships imposed on them by the callous Akufo-Addo/Bawumia government and to demand:

1. a significant reduction in fuel prices through the stabilization of Ghana cedi and repeal of crippling fuel taxes such the needless sanitation levy, the Special Petroleum Tax, the Price Stabilization and Recovery Levy, the new energy sector levy of 20 pesewas on a liter of diesel and petrol among others;

2. the immediate repeal of the obnoxious E-Levy on Momo transactions and other electronic transactions;

3. the immediate repeal of the nuisance COVID-19 levy of 1% on the VAT Flat Rate and the National Health Insurance Levy (NHIL);

4. the total cancelation of the stinking Agyapa deal in which few greedy elements of the Akufo-Addo/Bawumia government and their cronies are seeking to appropriate the mineral resources of Ghana for themselves in perpetuity.

7. an end to the misplaced priorities and continuous rape of the public purse by the Akufo-Addo/Bawumia government.

We believe that these demands if heeded to will go a long way to ameliorate the plight of suffering Ghanaians and provide a respite for all of us.

This historic demonstration will be preceded by community and stakeholder engagements in Kumasi and other parts of the Ashanti Region. We have also scheduled a Public Forum for the 20th of July, 2022 on the theme; “GHANA’S CURRENT SOCIO-ECONOMIC POSITION AND THE PROSPECTS OF AN IMF PROGRAM” at which several distinguished speakers will be sharing their perspectives on the dire economic straits we have been plunged into by the clueless, insensitive, oppressive, corrupt, wasteful and useless Akufo-Addo/Bawumia government.

Fellow countrymen and women, our beloved country is in deep crises and requires an urgent rescue. Our economy is currently on the verge of collapse and will inevitably collapse if something drastic is not immediately done to salvage it. Our resources have been hijacked by a few greedy government officials and their cronies while the masses continue to languish in abject penury. The future of our children and generations unborn is being mortgaged by the current selfish duty bearers of our country while moral voices look on unconcerned. To do nothing will only allow this evil to fester. This is not the time for partisanship, rather this is time for us to arise and unite to save Ghana from the clutches of the nation-wrecking Akufo-Addo/Bawumia government. Enough is enough.

We therefore call on all Ghanaians to actively participate in these all-important programs, especially the 22nd August Arise Ghana demonstration in Kumasi, which are aimed at birthing a new paradigm of responsible and accountable leadership in our country.

Thank you for coming and may God bless our homeland Ghana.