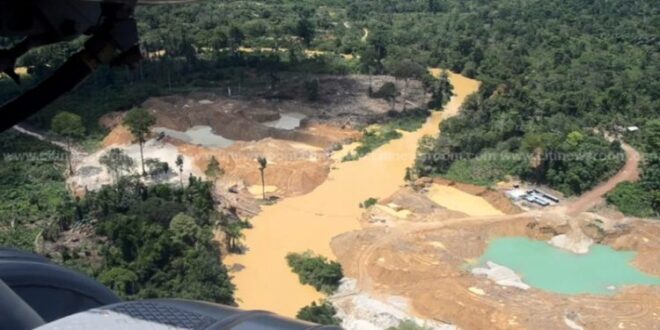 The government of the Republic of Côte d’Ivoire has complained bitterly about the current state of the Tano River, which serves as a source of domestic use for its citizens.

The river, which also serves as a natural international boundary line between Ghana and its western neighbour- Côte d’Ivoire, has been heavily polluted.

Speaking at the Africa Border Day event which was held at NOE in Côte d’Ivoire, Daouda Ouattara, the special advisor to the Prime Minister of the Republic of Côte d’Ivoire, Patrick Achi, stated that, the activities of illegal mining have rendered the river useless.

He called for “cooperation from both countries to end the menace and to restore the water to its pre-illegal mining glory”.

The Tano River in Ghana’s Western Regional town of Elubo in its present state can best be described as a milky brown liquid.

It will be difficult for any washing detergent to restore a piece of white cloth dipped in it for 2 minutes.

It has completely lost value and has become ticker than a creamy tea.

Aside from boat transport across unauthorized routes, River Tano is literally good for nothing.

Aquatic life has been jeopardized in the desperate search for gold.

The Africa Border Day was marked under the theme; Challenges of Cross-Border Cooperation and Management of Shared Resources.

Over the past years, there has been some litigation on the maritime boundary, which Ghana successfully won in 2017 at the Special Chamber of the International Tribunal of the Law of the Sea (ITLOS) in a case that lasted for three years.

In his address, the CEO of the Ghana Boundary Commission, Major General Emmanuel Kotia, noted that, Ghana and Côte d’Ivoire have agreed to form a joint boundary committee to cooperate on the re-affirmation of international boundary lines.

This, he noted, is geared towards the protection of the sovereignty of both nations.

The Western Regional Minister, Kwabena Okyere Darko, indicated that Ghana is on high alert to deter any insurgency.

He added that Ghana will ensure peaceful coexistence with neighbouring countries through cooperation.

Mr. Kwabena Okyere Darko used the occasion to call on the government of the Republic of Côte d’Ivoire to open its land borders to promote trade.

According to the regional minister, the continuous closure of land borders is taking a great toll on citizens of both countries, most especially residents in border communities.

Africa Border Day is a day set aside by the African Union, to recognize the significance of international borders and promote regional integration and foster unity in Africa.