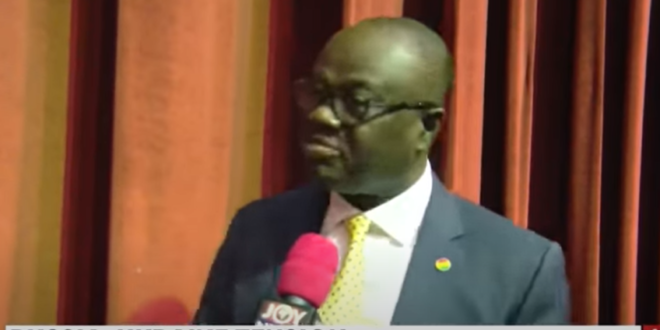 Deputy Foreign Affairs Minister, Kwaku Ampratwum-Sarpong, has advised Ghanaian nationals in Ukraine who are refusing to be evacuated to change their minds.

According to the Deputy Minister, the Ministry has received reports of some students refusing to be evacuated from the distressed country.

Speaking to JoyNews’ Blessed Sogah, Kwaku Ampratwum-Sarpong cautioned that it is risky for one to continue to live in Ukraine, at this time of the crisis.

He advised Ghanaian students not to overlook the evacuation exercise being undertaken by the government.

“It is not advisable to say that you’re not coming. You have come from a traumatic situation, a warzone into a safe place. The safest place to be is to be at home…The EU countries are also very much alert because they know that people will try, and especially their focus will be on people of African descent. So they’ve got their antennas up. I will sincerely appeal to them that having gone through what they’ve been through, best thing is not to continue in unchartered waters, just come home,” he said.

Meanwhile, the first batch of Ghanaian nationals evacuated from Ukraine arrived in Accra on Tuesday.

These persons were rescued through neighbouring countries by land due to the closure of Ukraine’s airspace since the beginning of the unrest in the country.

A Foreign Ministry representative helping with the evacuation exercise, Dr. Albert Kitcher, said many of the students left stranded in Ukraine continue to arrive at the Slovakia, Hungary, Romania and Poland borders.

He has so far received 45 of them who successfully crossed the Ukraine border on Monday.

“These are mostly students. For the non-students, I know some who have gone on their own. There are about four or five different steps that you take before you get to the border and then get on the plane. These people are leaving from the city of Lviv; so, they are in the territory of Ukraine.

“As they are leaving, the person leading the bus is constantly in touch with me and some of the student leaders, and we’re coordinating as and when they are on the road.

“As they are going, we’re giving information to the Ghana Mission so that when the people arrive, they would be there to receive them,” he said.

The Ministry has also disclosed that as of March 1, about 500 Ghanaians have been evacuated from Ukraine to neighbouring countries.

These countries include Poland, Romania, Hungary, Moldova and Slovakia.

Shirley Ayorkor-Botchwey in a meeting with relatives of Ghanaian nationals on Tuesday said 49 Ghanaians, including one child, have moved to the Czech Republic, 25 Ghanaians are in Slovakia, 134 Ghanaians in Romania, 81 in Poland, and 221 in Hungary.

She disclosed that “Two other batches from Romania in different groups of 70 and 64, respectively, are expected to arrive later this week.”