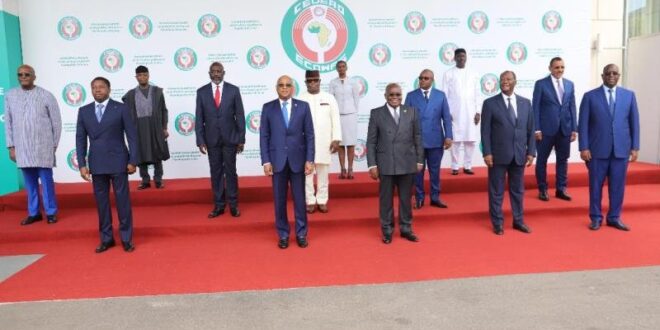 Accra, Sept 16, GNA – The Economic Community of West African States (ECOWAS) Thursday imposed sanctions, including a freeze in financial assets and travel bans, on the military junta in Guinea.

The bloc has also given the military rulers a six-month ultimatum to return the country to constitutional order, Jean-Claude Kassie Brou, ECOWAS President, told the media after the regional grouping’s extraordinary Summit, in Accra, to firm up a decision on the political impasse in Guinea.
Eight leaders, including the Presidents of Togo, Cote d’Ivoire, Senegal, Burkina Faso, Liberia, Sierra Leone, Guinea Bissau and Niger, took part in the meeting.
Nigeria was being represented by its Vice President. Three other foreign ministers and a prime minister represented their countries.
The Summit, opened by ECOWAS chairman Nana Addo Dankwa Akufo-Addo, discussed the outcome of the high-level mission that the Bloc sent to Guinea last week after the virtual emergency meeting of the region’s leaders on September 8, 2021, following the ouster of President Alpha Conde by an elite unit of that country’s military on September 5.
The Bloc at that meeting suspended Guinea’s membership, and asked the military junta to return the country to constitutional order, and to unconditionally release President Conde and all those held.
The High-Level mission, led by Ghana’s Foreign Minister Shirley Ayorkor Botchwey, last Friday went to Guinea, met the military rulers led by Lieutenant Colonel Mamady Doumbouya, and saw President Conde at where his is being held in detention.
But the military leaders, after consultations with the ECOWAS mission, outlined a number of conditions before handing over to civilian rule.
Soldiers, led by a former French Legionnaire, Lt. Col. Doumbouya, announced on September 5, 2021 that they had seized power and arrested 83-year-old President Conde, and suspended the Constitution of the West African nation.
They appeared on national television, with some draped in the red, gold and green flag of Guinea, to announce that the Government had been dissolved because of rampant corruption.
The military junta who called themselves the National Rally and Development Committee, closed all land and air borders for a week.
President Conde, Guinea’s longest ruler is still being held by the coup makers. Some other persons who were arrested in the process have been released.
Source: gna.org.gh
2021-09-17
fafaafmonline_editor