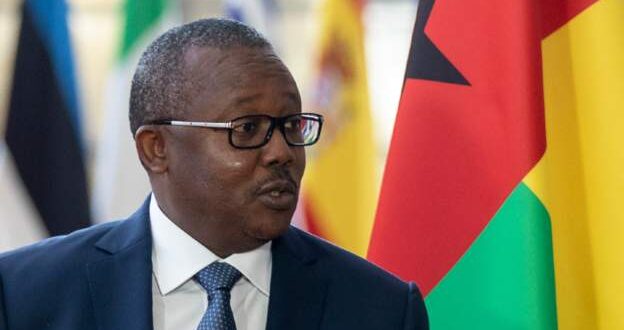 ECOWAS, the regional bloc promoting political and economic co-operation in West Africa, has condemned what it calls an “attempted coup” in Guinea-Bissau, and is urging the military to return to its barracks.

It follow reports of men in civilian clothing opening fire close to a government building hosting a meeting between the president and prime minister of Guinea-Bissau, whose whereabouts remain unknown.

“Ecowas is following with great concern the evolution of the situation in Guinea-Bissau… where military gunfire is taking place around the government palace,” Reuters quotes the statement as saying.

“Ecowas condemns this attempted coup and holds the military responsible for the safety of President Umaro Sissoco Embaló and members of his government.”

In recent days Ecowas suspended another of its members, Burkina Faso, where the military mounted a putsch.

Guinea-Bissau’s Foreign Minister Suzi Barboza has told the BBC she is currently abroad and is waiting for news about the president.

There has been no official word on the whereabouts of the president and prime minister, who had been holding a meeting when gunshots where fired in their vicinity at a government building in the capital, Bissau, on Tuesday afternoon.

Schools and offices have closed as a precaution, and the military has been deployed to a number of government buildings.

President Umaro Sissoco Embaló, himself a former prime minister, was elected to top office in 2020 after winning a run-off vote against another ex-prime minister.

President Embaló has said he wants to resolve political tensions in the West African country, one of the world’s poorest nations, which has seen nine coups or attempted coups since 1974.

France-based news service LSI has shared this footage that it says captures some of the gunfire in Guinea-Bissau’s capital this afternoon:

A witness in Guinea-Bissau has told BBC Focus on Africa that armed men in civilian clothing opened fire at the ministerial palace in the capital, Bissau, where the president and prime minister were holding a meeting.

According to the witness, the military and police went to the scene where the armed men were firing, following which a police officer was shot.

Soldiers are patrolling the streets of Bissau in military vehicles and some calm has returned.

Guinea-Bissau has a long history of political instability and military coups, the last of which was in 2012.

One police officer has been killed in the capital of Guinea-Bissau, a resident of Bissua has told BBC Focus on Africa radio.

It follows reports of gunfire near where President Umaro Sissoco Embaló and Prime Minister Nuno Gomes Nabiam were having a meeting.

The resident told Focus on Africa that the firing had now subsided and had actually occurred at a ministerial building, not the presidential palace as had been reported.

AFP earlier reported that people had been seen fleeing the area close to presidential palace and that the local markets were closed and banks shut their doors, while military vehicles laden with troops drove through the streets.

Reports from Bissau, the capital of the West African nation of Guinea-Bissau, say there has been gunfire in the vicinity of the presidential palace.

Unconfirmed reports say soldiers have surrounded the building. President Umaro Sissoco Embaló is understood to be inside.