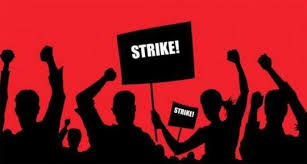 The University Teachers Association of Ghana (UTAG) has directed its members to resume the suspended strike action from Friday, October 8, 2021.

The decision follows the failure of government to meet demands made by the lecturers concerning their conditions of service.

The University Teachers Association of Ghana (UTAG) embarked on a strike from August 2, 2021 to protest what they say is their poor conditions of service.

After two weeks of the strike, they reached an agreement with government to suspend their strike action and resume negotiation for a mandatory 30 days, with the hope that their concerns will be addressed.

Among others, the University Teachers Association of Ghana wanted government to pay entry level lecturers 2,084 dollars.

But after the expiry of the mandatory 30 days negotiation, UTAG is directing members to suspend all teaching related activities on campus.

“For this reason, the National Executive Committee of UTAG at its meeting held on 1st October, 2021, members should resume the suspension of teaching and related activities until further notice.”

The University Teachers Association of Ghana had also accused government of bad faith in its negotiation for an improved conditions of service.

The Association said despite backing down on some of their demands and government pledging its commitment, nothing tangible has been achieved yet.

The Association’s University of Ghana branch Secretary, Professor Ransford Gyampo had also written on the situation and said lecturers on the various University campuses were angry about the lack of progress in the negotiation.

According to Professor Gyampo, who wrote an open letter to President Akufo-Addo and the Vice President, the situation has generated considerable disquiet among lecturers who are angry about the lack of progress.

“As you may be aware, some of us have deliberately been quiet about what has been happening following UTAG’s decision to temporarily suspend its strike and return to the negotiations table. We believe the stakeholders needed some peace of mind to talk.”

“I however wish to respectfully remind you that the one month negotiation period expires in five days time. Unfortunately, as of now, nothing concrete has been achieved. As you may be aware, some of us had to practically beg our members to agree to suspend the strike action for negotiations because, we knew that you were both worried about the impasse and were very much resolved to bring a finality to the matter.”

He continued that the Finance Minister had failed to attend any of the meetings convened, “Unfortunately, I repeat, nothing concrete has been achieved. I am told, much of the issues have to do with your Finance Minister, who is still not attending meetings himself, but delegating, probably, because he sees UTAG matters as trivial. He may continue to treat us like rags, but when there is mobilization of the anger of University Teachers in a manner that creates a praetorian situation, the bucks would stop with you in dealing with the mess.”