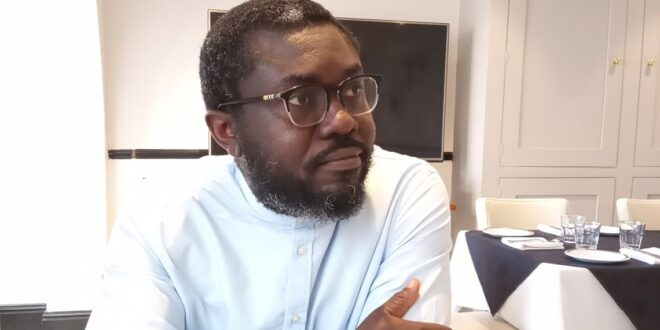 Convener of the #FixTheCountry movement, Oliver Barker-Vormawor, is to spend another night in police custody despite being granted bail earlier today, Wednesday, March 16, 2022.

This is due to some challenges regarding his bail conditions. The Tema High Court granted Mr. Barker-Vormawor bail in the sum of GHS 2 million with two sureties.

The court also ordered that one of the sureties is to deposit a document covering landed property within the court’s registry.

But in a statement on Wednesday evening, the Police said the Court’s Registrar was prevented by the sureties to submit the document for verification at the Lands Commission.

Subsequently, the Registrar was unable to proceed with the execution of the bail until he receives a response from the Lands Commission and that, the police should take the Oliver Barker-Vormawor back to cells.

“Police is therefore waiting for the High Court Registrar to direct”, the statement added.

Mr Barker-Vormawor’s passport should also remain in the custody of the Republic, and he must report himself once a week to the police command.

Justice Daniel Mensah ruled that the Court cannot disable itself from the grant of bail, having regard to the facts of the case and the legal arguments urged upon him by both counsel for Mr. Vormawor and the Republic.

He disagreed with arguments of the position that Mr. Vormawor did not have a fixed place of abode having regard to the facts of the case; and that he was at flight risk since his passport was already in the custody of the Republic.

The activist is accused of inciting an overthrow of constitutional organs of government but he has denied the claims and said he is ready to go to trial.

He was arrested on February 11, 2022, over claims that he had threatened to cause a coup if government went ahead to pass the controversial Electronic Transaction Levy.

Mr. Barker-Vormawor in his application for bail, contested the claims, saying a charge of treason felony against him cannot be sustained by the evidence available.

This is notwithstanding that the Attorney-General in an affidavit in opposition to the bail, insisted that evidence uncovered so far corroborates a charge of treason felony against the activist.

Mr. Barker-Vormawor has, however, wondered why the Republic has not charged him or taken a statement from him on the charge.

Meanwhile, Oliver Mawuse-Barker Vormawor has told the Court presided over by Justice Daniel Mensah that he is in good health and hopes they take him to trial.

The judge had sought to find out about his health status after he had been taken to the Police Hospital for medical care.